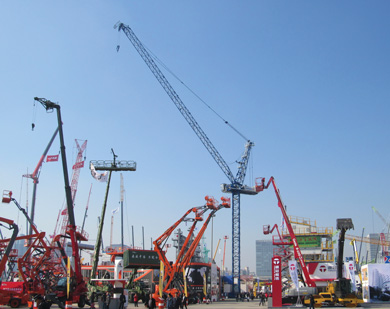 The CML190 crane comes in two versions of maximum load capacity (12 and 18 tonnes), both with maximum reach of 60 metres and different jib configurations every five metres. This luffer, as well as the upcoming models of the CML Series, have been designed under Linden Comansa’s modular system. Therefore, every component of the crane is light and compact to allow easy transportation and fast erection. Furthermore, the hoisting and luffing cables come pre-installed from the factory for faster installation of the crane.

The main technical features of the new cranes are: Both versions of the new model will be available for customers in Asia, the Middle East, and Oceania from 2017. Comansa CM is confident that the CML Series will get a warm welcome in markets such as Thailand, South Korea or Malaysia, in which there are many high-rise construction projects and demand for luffing-jib tower cranes is increasing. Actually, the exhibited model has been sold to Thailand dealer Smart (1994) Ltd.

Along with exhibiting the new CML190, Comansa CM also informed customers and visitors about its recent novelties: the new 8 metre folding cross base, and the CM1600 Series of Flat-Top tower cranes. These new models are available since last September and have maximum load capacity of 10 or 12 tonnes.

Also, a few details of the upcoming LCL700 luffing-jib crane from Linden Comansa were revealed. This new crane, the biggest luffer from the Spain-based manufacturer, will come in two versions of maximum load capacity: 50 and 64 tonnes. It will be available worldwide from March 2017.

The bauma China trade show was again a success for Comansa CM. In addition to the agreements signed in Shanghai, including three units of the CML190.