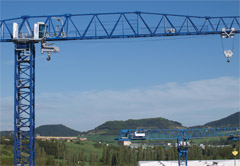 Due to its characteristics, this new model is especially useful in public works, industrial construction, mining and infrastructures, and allows Linden Comansa to complete its already wide range, as this new crane covers the space between the cranes 21 LC 550 (18 and 24 tonnes) and 21 LC 750 (24, 36 and 48 tonnes).


The 21 LC 750 tower crane, launched in 2009, has been one of Linden Comansa’s most succesful models, mainly due to the innovative design of the slewing part, and the easiness of its assembly. A similar design has been applied in the 21 LC 660 tower crane, which doesn’t have apex element either, as the first jib and counterjib sections are assembled together directly over the slewing platform through fast conections, which saves time, reduces costs in auxiliary equipment, and improves the safety.

Both jib and counterbib sections that form the slewing head of the 21 LC 660 are, which provides an easier assembly of the crane, and shortens the counterjib of the 21 LC 660 three meters in comparison to the 21 LC 750. Most of the jib sections of the 660 are the same of the 750, which increases the modularity and the possibilities of section interchangeability between both cranes.

For the tower of the 21 LC 660, a new mast section has been designed, named D35, which is more economic than the tower section at the 21 LC 750 (D36). Both have the same dimensions (5.5m high and 2.5m wide-18ft high and 8.2ft wide), which makes them compatible and able to share the same hydraulic jacking cage. The D35 mast sections can be divided in four panels, are easy to ass- emble and transport, and are easily joined to other sections by pins. 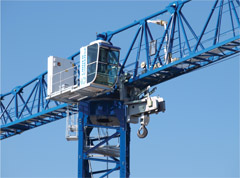 The experience acquired with the 21 LC 750 has led to some improvements on the new model, such as expanding the transit zone at the slewing part, or placing all the electrical components and converters in one single cabinet, at the platform of the cabin, which allows easy maintenance labors.