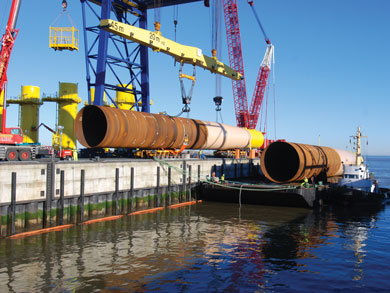 The Modulift beam was used as an inverted spreader, owing to the two pick points above it and the need to bring the slings together in one point. Picture copyright Cuxport GmbH
A Modulift spreader combined with a 45m-long beam attached to a gantry and a crawler crane as 750t monopiles were tandem lifted from pontoons onto land in Cuxhaven on Germany's North Sea coast.

Schmidbauer GmbH & Co. KG was challenged by Cuxport GmbH to develop a solution for lifting the monopiles, bound for the Nordsee One offshore wind farm, utilising an existing gantry. However, the crane only offered 600t of lifting capacity and the beam itself had a net weight of 100t and the gantry infact was only suitable for 500t of lift.

Consideration also had to be given to a number of additional complications. There was a special coating on the monopiles that meant attaching rigging equipment was not possible at all points, while height was limited and there was 20m of distance between the gantry's hooks that were positioned 10m to each side of the centre.

The lift planning team discovered that there were two lifting lugs in the centre of the 45m beam offering a more convenient distance of just 4.75m. However, as Philipp Verges, sales manager for global projects and key account manager offshore at Schmidbauer, explained, they were 90 degrees in the wrong direction—the beam was originally manufactured for special lifting of three-legged tripiles—and the forces applied during lifting would have broken the eye plates.

Eventually, a MOD 400/600 beam, sourced from Schmidbauer stock, was used as an inverted spreader, owing to the two pick points above it and the need to bring the slings together in one point. MOD 400/600s offer capacity to 600t at 12m / 40ft and up to 23m / 76ft at lower capacity. Verges says: "Slings came together in a 600t hook block that allowed us to complete turning of the monopiles. The rigging around the monopiles had to be kept short so we had to deliver [125t] Polytex slings at a special length to fulfill the requirements.”

At the other end of the tandem lift, Schmidbauer provided a Liebherr crawler crane (model LR 1600/2) with wheeled counterweight carrier that allowed it to lift even the second row of each pontoon load from the barge without turning it.

Thirty monopiles were lifted in a five-month period; two travelled on each pontoon to Ambau GmbH in Germany. Verges explained that, if a smaller crawler crane was used after picking up the first row, Schmidbauer would have had to turn the barge prior to lifting the second unit. Otherwise, the distance would be too far, he adds.

The Nordsee One wind farm consists of one offshore substation platform and 54 wind turbines that will be installed in water depths ranging between 25m and 29m. The wind farm is situated in a spatial planning area that is specially reserved for offshore wind energy.