The "México - Tuxpan" highway is one of Mexico’s major communication projects, and will link the capital city with the coast town of Tuxpan in the Gulf of Mexico. This highway means an enormous investment, not only because of the 293-kilometer-long way (182 miles) but also due to the country’s complicated orographical conditions which have forced to project 2.5 kilometers (1.5 miles) of bridges and 4 kilometers (2.5 miles) of tunnels and to prove an endless number of challenges to the engineers. 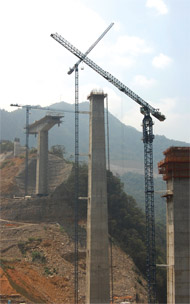 In the State of Puebla, for the 36.7-km-long section (almost 23 miles) between Necaxa and Ávila Camacho alone, 16 bridges have been projected, and among them stands out the 850-meter-long San Marco bridge (2,789 ft). 5 Flat-Top 21 LC 290 18t from Linden Comansa are being used in this bridge, especially for the construction of the pillars. One of them will be more than 200 meter high (656 ft) which will make it of the world’s most particular structures, and the planet’s second highest bridge over pillars, after the Millau viaduct in France.

Groke, Linden Comansa’s official dealer in Mexico, is the maker of the work of these 5 cranes in this section of the project, granted to the consortium formed by Mexican ICA and Spanish FCC.