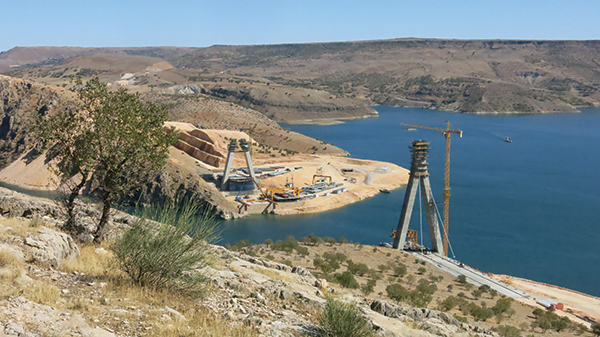 Two Manitowoc’s Potain tower cranes are building a 610 m long cable-stayed bridge in south-east Turkey. The two MC 235 Bs are working 10 hours a day at the 30-month project, which will create a vital connection across the Ataturk Dam Reservoir on the Euphrates River.

The 10 t capacity MC 235 Bs were supplied to main contactor Gulsan Co. by Potain’s Turkish dealer Tekno Vinç, which is the largest tower crane operator in Turkey. Sinan Türeyen, group director at Tekno Vinç says, “the Potain cranes are ideal for demanding projects of this nature.We have used Potain cranes at major job sites throughout Turkey for years – they are easy to use and offer exceptional durability, Plus, they offer the support of Manitowoc Crane Care, which gives us great service and quick spare parts, if needed. This bridge will be another Turkish landmark that will have Potain to thank for its on-time creation.”

The first Potain MC 235 B was erected at the Nissibi Bridge job site in September 2012, while the second joined in January 2013. Both will be dismantled by July 2014, ahead of the bridge’s opening later this year.

The top-slewing tower cranes are lifting general building materials used in traditional cable-stayed bridge construction, such as formwork and steel structures. As construction progresses, the cranes will lift large sections of carrier cables weighing up to 10 t. 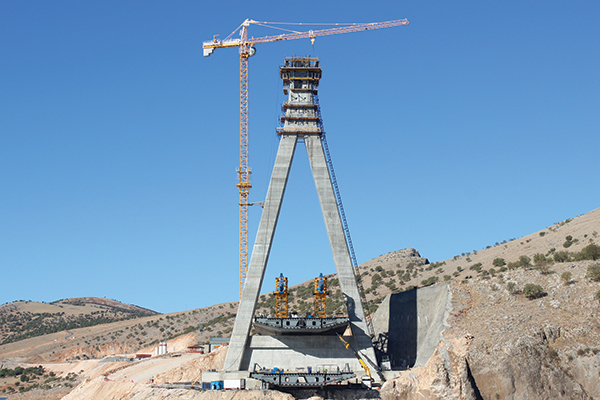 The two Potain cranes are working at heights of 101 m and 104 m, and both are rigged with 45 m jibs. The cranes are anchored to the bridge’s 96 m tall pylons on each riverbank.

The cranes were transported to the job site from their base near Istanbul, more than 1,300 km away. Once on site, a ferry was used to transport one crane to the other side of the river.

Nissibi Bridge will be 24.5 m wide and span 400 m across the Euphrates River. The project broke ground in July 2012.

Established in 1990, Tekno Vinç operates a fleet of more than 100 Potain tower cranes, which it deploys at projects throughout Turkey. Tekno Vinç provides crane rental and sales, as well as meeting an extensive range of servicing needs.

Founded in 1946, Gulsan Co. is a leading Turkish construction company based in Ankara.