Six Manitowoc's Grove GMK6400s will soon be at work in France. A steady flow of the 400 t capacity all-terrain crane has arrived in the country since August 2012. Mediaco, the largest crane rental company in France, is the latest to add the award-winning GMK6400 to its fleet.

The GMK6400 is the strongest six-axle crane in the world and despite its size, easily meets road permit laws in France. Both of which are key reasons why the crane is proving so popular across the country as Philippe Dumas, sales director Manitowoc EMEA, explains: " 'If you build it, they will come' if you build the best possible crane, customers will want it."

He says, "And that is the GMK6400; this crane can perform lifts that no other six-axle or even seven-axle crane can, and yet is easy to transport on French roads. We are incredibly proud of what this crane can do and, much like our 300 t Grove GMK6300L, I expect it to scale more sales milestones in the future." 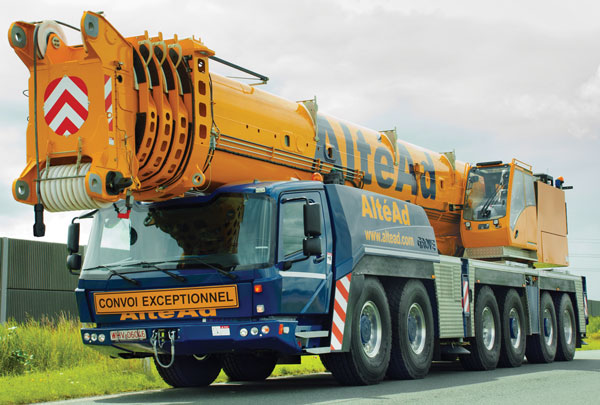 All of the GMK6400s in France are owned by crane rental companies. The cranes already in the country are used for general construction work. In particular, expansion and maintenance work at refineries and manufacturing plants are among their main activities. The cranes are located across the country in Nantes, Lyon and Le Havre.

The three GMK6400s going to Mediaco will join the company's huge fleet of more than 700 cranes, and be based in Paris, Nantes and Marseilles.

The first unit to arrive in France was delivered to AltéAD, a lifting and industrial plant service specialist, in August 2012 and has been in almost constant use since then. A recent job saw the crane perform a variety of heavy lifts at the expansion of a Louis Vuitton factory.

The other GMK6400s in France are owned by rental companies SMMI and Foselev, based in Lyon and Le Havre respectively.

Outside of France, GMK6400s can now be found working in Germany, Switzerland, the Netherlands, the U.S., and as far away as Curacao and New Zealand.