Manitowoc to display its range of cranes

The very latest in lifting technology will be on display at the Manitowoc booth. A host of unique innovations from across the company's range of crawler cranes, all terrain cranes, rough terrain cranes, boom trucks, tower cranes, and self-erecting cranes will underline the manufacturer's pre-eminence across the spectrum of lifting applications. 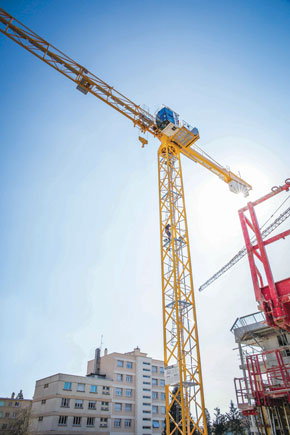 Barry Pennypacker, President and CEO, Manitowoc, said that the company's showing at this year event reflects its new direction as part of The Manitowoc Way. "The Manitowoc booth will be the premier destination in the Gold Lot at CONEXPO. Each of the cranes on display will combine class-leading design and performance, as a result of key inputs from our customers in the development of our products. This underscores our long-standing commitment to innovation," he says. "We are unveiling a number of cranes that should surprise and delight customers. As a company, we're committed to bring greater velocity to our operations, and to introduce new products more rapidly to improve the return on invested capital for our customers. Innovation and velocity are the primary drivers of The Manitowoc Way company culture, and CONEXPO is another opportunity for us to present that to the industry."

Manitowoc is keeping details of several of its new cranes under wraps until the show itself. The company's past appearances at CONEXPO shows have been characterized by the unveiling of show-stopping, new launches, and 2017 is sure to continue the tradition.

Both machines also feature a single engine, an innovative design concept pioneered by Grove in larger all terrain cranes. The inclusion of only one engine delivers a number of benefits, including more flexible configurations for travel. This is especially useful for U.S. customers, who frequently have to adjust the transport configurations of their cranes when moving from state to state, or even from county to county. 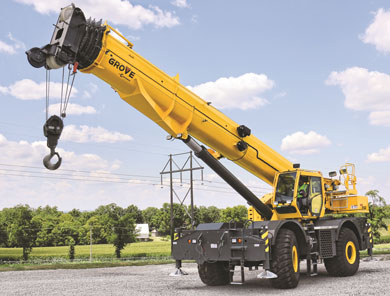 Another Grove mobile crane confirmed for CONEXPO 2017, is the GRT880 from the line of rough terrain cranes. This new 75 t (80 USt) capacity unit is being publically displayed in North America for the first time. Boasting a new design, which also features on the company's GRT8100, the GRT880 incorporates Manitowoc's Crane Control System, or CCS. Both the cranes are more reliable than ever before, thanks to the extensive product testing performed at the company's Product Verification Center (in Shady Grove, Pa.) In this facility, each component undergoes extensive validation as part of the design process, to deliver better overall product performance.

The Manitowoc range of crawler cranes will be represented with a product at the company's booth. For the Potain brand of cranes meanwhile, there are three machines on show: one new self-erecting crane, plus two top-slewing tower cranes. The self-erecting crane is the Hup 40-30 from the innovative range of machines that were unveiled in 2016. The unit is appearing at a major exhibition like CONEXPO for the first time and its headline feature is the class-leading versatility and agility of design that offers 16 different options for configuration. Technology features strongly, too, with the Hup 40-30 including a new remote control; Potain's Smart Set Up software; and High Performance Lifting (HPL) winch technology.

The two Potain top-slewing cranes at CONEXPO have a strong technology focus, primarily through their updated design that incorporates CCS. The MD 559 will showcase how CCS technology has been incorporated into Potain's line of high capacity MD cranes. From the topless range of Potain cranes, the company will show the MDT 219—the highest capacity model in the MDT CCS City tower range, which was introduced in 2016.

The inclusion of CCS in Potain tower cranes brings a number of advantages, including fast and easy set-up, which can be managed in as little as 15 minutes. The technology also offers closer management of lifting operations which in turn delivers greater capacities. Maintenance is easier thanks to the on-screen maintenance tool, while the usage of standardized components means spare parts are easily available.

From the National Crane brand, an all-new boom truck series will make its tradeshow debut. Manitowoc will feature a model from the NBT40-1 series, a new trio of boom truck cranes that are fully compliant with ANSI A92.2 and ASME B30.5 ratings, as well as OSHA standards, to offer customers the versatility of both a boom truck and an aerial lift. This new series will be especially useful for the utility industry, where energy work on power lines and new infrastructure construction often require the use of both a crane and an aerial platform.

Manitowoc's booth will also include interactive exhibits related to a range of services such as Manitowoc Crane Care customer support program and Manitowoc Finance arm. The company will occupy Booth G3348 in the Gold Lot at CONEXPO 2017.