Coteccons Group, one of Vietnam's fastest growing construction companies, is planning to expand and consider Manitowoc's fleet of Potain tower cranes as one its major component. The company has found the Potain MCT 205 to be particularly well suited to its needs. The 40-plus fleet of Potain cranes have worked on some of Vietnam's most high-profile construction projects of recent times, including LandMark 81 (Vietnam's tallest building), Vinhomes Central Park, The Manor, City Garden, The One and SC Vivo City, all of which are in Ho Chi Minh City; and IndoChina Plaza, D' Capitale, Metropolis and Mandarin Garden in Hanoi.

One of Vietnam's fastest growing construction companies, Coteccons Group, is using its fleet of Potain tower cranes to support its expansion plans. The company, which has its headquarters in Ho Chi Minh City, is looking to extend its scope of operations, not only across Vietnam but also into the surrounding nations of South East Asia.

The 40-plus fleet of Potain tower cranes belonging to Coteccons has worked on some of Vietnam's most high-profile construction projects of recent times, including LandMark 81 (Vietnam's tallest building), Vinhomes Central Park, The Manor, City Garden, The One and SC Vivo City, all of which are in Ho Chi Minh City; and IndoChina Plaza, D' Capitale, Metropolis and Mandarin Garden in Hanoi. The company has found the Potain MCT 205 to be particularly well suited to its needs and has purchased many of them since the crane launched approximately two years ago. Coteccons also plans to add more luffing jib cranes to its fleet as demand for these units is growing, particularly for urban development work. 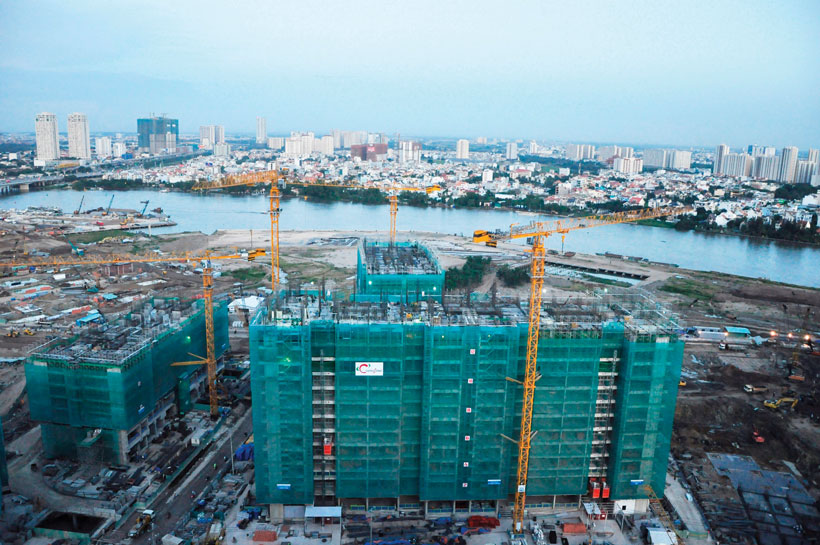 "We like Potain cranes because we know we can rely on their quality and dependability," said Vu Thanh Ha, head of construction at Coteccons. "We can employ the Potain cranes for three shifts every day, which means improved productivity and greater efficiency. We use the cranes for setting formwork, lifting steel rebar and other building materials and pouring concrete. We're also focused on cranes that offer high capacity, fast speeds and the ability to work in confined spaces."

In addition to adding over 20 new MCT 205 cranes, Coteccons has also added three MCR 160 luffing jib cranes, another relatively recent product from the Manitowoc factory in Zhangjiagang, China. Both these units, and all tower cranes built by Manitowoc at its Chinese plant, are designed in collaboration with the Potain Center of Excellence in France. This gives local customers the perfect balance of industry-leading engineering design, with locally-sourced and tailored manufacturing. All of the cranes for Coteccons Group were supplied by Minh Chi Co, Potain's national dealer for Vietnam.

"Minh Chi is one of the most well-established equipment suppliers in Vietnam, so we are perfectly positioned to address the fast-growing needs of the construction market here, which has surged over the past five years," said Dao Anh Vu, sales director at Minh Chi Co. "We are delighted that Coteccons has continued to grow its commitment to the Potain brand, and the after-sales service our team provides is ensuring schedules stay on track. We look forward to supporting the company further as it continues to grow."

The MCR 160, which was launched in July 2015, has a maximum capacity of 10 t and can work with up to 50 m of jib. Its capacity at the jib end is 2.4 t. The crane is well-suited to both internal and external climbing, which makes it particularly attractive to contractors in Vietnam and other Asian countries where the internal positioning of tower cranes is increasingly required.

To facilitate this, the crane can be assembled on either 1.6 m or 2 m-wide mast sections. There's a choice of three winches available on the MCR 160, including the 100 LVF 25 Optima, which offers exceptional lift ability and reach. The 75 kW-rated unit can hoist 1.25 t loads at speeds of up to 188 m/min, while its 1,270 m rope capacity makes it ideal for tall buildings.

The MCT 205 is a topless crane and replaces the MC 205 B in the Potain range. The MC 205 B was one of the region's most popular crane of recent years, but the MCT 205 is already proving itself to be a more than worthy successor. Like the MCR 160, the crane can also be mounted on either 1.6 m or 2 m mast sections, depending on required configuration on site, and again making it a strong choice for internal climbing applications. Maximum working radius on the MCT 205 is 65 m (when configured on 2 m mast sections), 5 m more than on the MC 205 B. Maximum capacity for the crane is 10 t and its tip capacity when working with its full 65 m jib is 1.75 t.

Recent years have seen Coteccons expand its business to match the developing needs of the Vietnamese market. The company has established a dedicated infrastructure division, opened a representative office in China and invested heavily in advanced Building Information Modelling (BIM) technology.

"Coteccons is one of Vietnam's leading contractors so it's important we use the best equipment, such as the Potain MCT 205, to help us deliver Vietnam's next generation of projects that are bigger and more sophisticated than ever before," Ha said.