For the construction of prefabricated flats in Singapore, Manitowoc’s Potain MCT 385 tower cranes help in lifting 17 t units of capacity in a congested job site 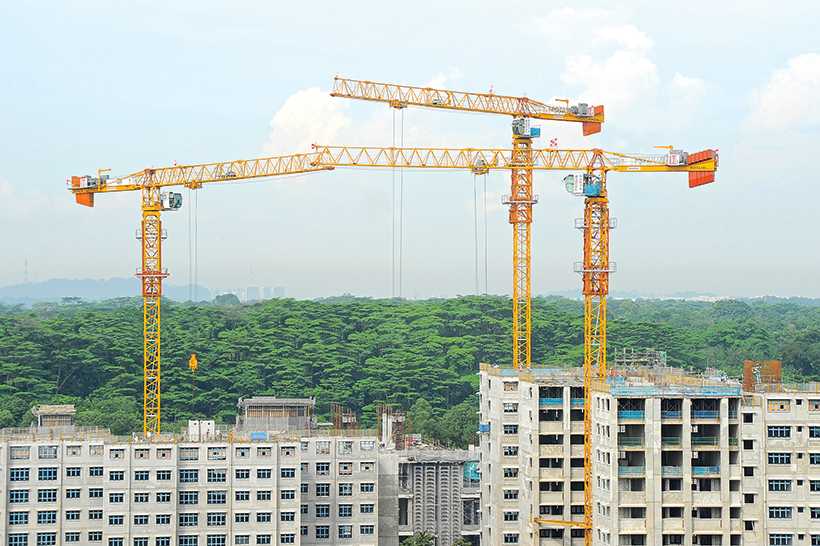 The Housing and Development Board (HDB) has been using pre-cast components to build flats in Singapore since the 1980s. A project currently underway in Sembawang in the northern region of the island-state is among the latest, although this one has a notable difference. It is the first to involve pre-cast modules with bathroom fittings that are completely built-in.

Having built-in plumbing and fittings saves time during construction but it adds a new challenge – increased weight. For contractor LC&T Builder, that meant finding a tower crane that had a large enough capacity to lift the 17 t bathroom units, yet could still fit onto a congested job site. Huei Teck Low, senior project manager at the Singapore-based company, explained the dilemma:

“As we looked around, most of the cranes had a maximum capacity of 16 t and didn’t have the load charts we needed for the lifting and positioning of the bathrooms,” he said. “We called in crane supplier Manta Equipment, and the company suggested the 20 t Potain MCT 385. After seeing the cranes in action, we knew they’d be right for this project. The capacity of the cranes is their biggest selling point.”

LC&T Builder rented a total of 10 MCT 385s from Hong Kong-based Manta, which also operates a large office in Singapore. Though a re-design eventually rendered the pre-cast and pre-fabricated bathroom units lighter at 12 t – and comfortably under the maximum capacity of the cranes – the job site’s tight working quarters still presented a challenge.

“Crane layout on all HDB developments tend to be quite constrained because the construction area extends close to the borders of other properties. There were also a 6 m driveway and 2 m border that we needed to consider,” Low said.

LC&T Builder configured the cranes with relatively short jibs, ranging from 25 m to 35 m, so as to avoid over-swing of neighboring properties (the maximum jib length that the MCT 385 can accommodate is 75 m).

Starting at 35 m in height, the company steadily climbed the MCT 385 cranes as construction of the building rose, topping out at 55 m. Over the course of the project, the cranes will lift some 35,000 loads for the development’s 1,012 apartments.

Aside from the pre-cast and pre-fabricated bathrooms, some of the heavier loads that the cranes have to deal with include lift walls and staircase walls. These sections weigh approximately 7 t, while other pre-cast sections typically weigh about 5 t to 6 t. The project is slated for completion in the third quarter of 2017, and the cranes are expected to leave the worksite late this year once the last of the modules are lifted into place.

“The MCT 385s have proven to be very reliable machines so far in this project. Their lifting ability and adaptability to compact worksites have helped us stay on course – and even speed up in sections,” Low said.

The HDB project reflects a growing trend in Singapore toward the use of prefabricated construction, which delivers both time- and cost-savings. LC&T Builder has even developed its own capability to create some precast modules. This has allowed LC&T to exercise greater control over work schedules without having to depend on other companies to deliver precast units and components.

Founded in 1971, LC&T Builder is an established Singaporean contractor with HDB developments comprising 90 percent of the company’s work. The company is presently working on another HDB project in Jurong West, as well as a warehouse on Harvey Road and a condominium in Pasir Panjang. LC&T Builder currently has 100 employees based in its offices, with an additional 200 to 300 on-site construction workers.

Manta’s principal businesses are the rental and trading of tower cranes, trading of mast-climbing work platforms and maintenance services for tower cranes. The company serves the construction and infrastructure sectors in Hong Kong, Macau, Singapore and Vietnam. Manta has been operating in Hong Kong since 1975 and opened an office in Singapore in 1997.