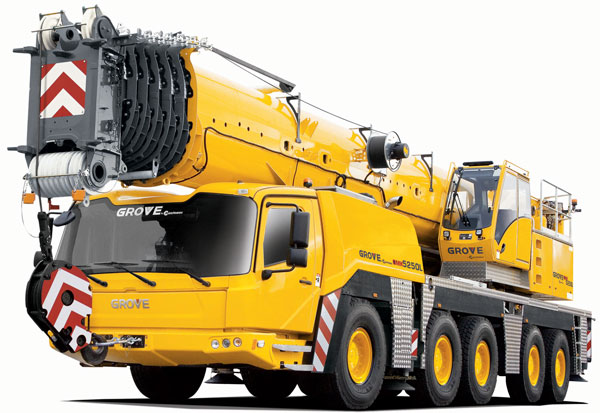 Manitowoc has announced a new Grove all-terrain crane for the global market and as with other Grove launches of recent years it offers several unique innovations and class-leading capabilities. The 250 t capacity Grove GMK5250L has the strongest reach and load chart of any five-axle crane. It also offers the best maneuverability and class-leading driver comfort, which it delivers thanks to its inclusion of a VIAB turbo clutch and integrated retarder – the first ever mobile crane to feature the system.

The VIAB turbo clutch module eliminates both fluid overheating and clutch burning, while enabling wear-free starting and braking. It also contributes to fuel savings and fuel consumption on the GMK5250L is estimated at approximately 30% below that of its predecessor, the GMK5220.

The "L" designation for the GMK5250L indicates it is a long boom all-terrain crane, and in this case the main boom is an impressive 70 m, which also includes Grove's Megaform shaping for better strength and stability. With its long boom length, the GMK5250L can offer more reach both vertically and horizontally than any crane in its class, allowing owners to take on a greater range of jobs with the crane.

Boosting overall reach is a 21 m hydraulic swing-away jib, which can be extended with either an 8m boom extension, two 8m jib inserts, or a combination of both for a total possible jib length of 37m. For optimum usage, the full jib can also be operated while the crane is working with its full 70m boom length extended. Another benefit of the jib is its ability to offer increased offset of up to 50°compared to a typical 40o on other Grove cranes in its class - plus there is an optional integrated heavy duty jib available.

Jens Ennen, senior vice president all-terrain and truck cranes at Manitowoc, said the new GMK5250L captures many years of improvement and innovation at the Wilhelmshaven factory in Germany, where the crane is built.

"This new Grove is packed with innovations that we will also be extending to other new cranes, adding them as standard and giving our customers even more value," he said. "Design features from us that first raised the bar in all-terrain innovation are now becoming our standard. We are continuing to work with the latest technology and this will keep us at the forefront of mobile crane efficiency and design."

The Grove GMK5250L is designed for efficiency, giving users a highly versatile crane, packed with the latest innovations. Operators will feel at home in the new Grove GMK5250L superstructure cab, with its Crane Control System (CCS) and the new Boom Configurator Mode. The standardized CCS is a user-friendly interface that Manitowoc is featuring on all new all-terrain crane models, as well as crawler cranes, rough-terrain cranes, truck cranes and tower cranes. The CCS components and operating software have been specifically designed, developed and tested by Manitowoc Engineering and Innovation teams worldwide to ensure the highest reliability standards.The cab also features a new ergonomic jog dial and new joysticks. 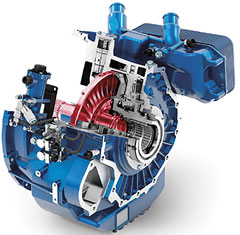 The highly intuitive Boom Configurator Mode makes it quick and easy to select the optimum boom position for a specific lift. The operator inputs the lift parameters – radius, load and distance to be moved – and the system calculates the best boom configuration. Once the operator selects the preferred option, the boom automatically extends to the required length.

The GMK5250L is powered by a single engine-a concept pioneered by Grove on its highly successful Grove GMK6400. On the GMK5250L, the engine is a Tier IV Final/EUROMOT 4Mercedes-Benz OM471LA, a six cylinder diesel engine with a 390kW (520hp) rating and a maximum torque of 2,460 Nm. The engine drives the carrier and powers the superstructure,and on the GMK5250L this is managed by one simple and reliable angular gear box. A single engine means lower fuel consumption during operation, reduced overall weight and less maintenance, meaning the crane is far more economical.

With its 12 t per axle configuration, and dimensions suited to global roading requirements, the compact Grove GMK5250L offers excellent roadability.Compared to the GMK5220, the Gross Vehicle Weight has been reduced to give customers more transportation options including the ability to carry more equipment on the crane. Special attention has also been given to the appropriate axle group spacing and specifically the fact that this exceeds 8 ft(2.4 m) –a strict requirement for roading mobile cranes in North America. There are additional design features that make the crane far easier to move in countries with stricter axle loading requirements, such as the U.S., Canada, Norway, Australia and Japan.

Meanwhile at the other end of the scale,in countries where the local requirement is for axle loadings of under 16.5 t (such as the UK), the crane is able move on the highway with up to 21t of counterweight. As most other cranes in this class are limited to 12 t counterweight on the road in the UK, the Grove GMK5250L offers outstanding load chart advantages of up to 50%.

Once on the job site, the crane can be moved with its full counter weight of 80 t saving valuable time that would otherwise be spent installing or removing counterweight sections.Additionally, some of the counterweight slabs are interchangeable with those of the GMK6300L, optimizing logistics and reducing transport costs for customers. An optional self-rigging auxiliary hoist is available too, which eliminates the need for an assist crane during on-site rigging.

On site movements are made easier with the inclusion of Grove's patented Megatrak independent suspension as well as the all-wheel steer system, which means no axles need to be lifted while moving -again enabling the optimum amount of counterweight to be carried. Another solution on the GMK5250L, which has already featured on the GMK6300L and GMK6400, is the MMI (Man Machine Interface). The MMI allows the suspension to be controlled even while in a locked position.

"Customer return on investment has been the key driver in the development of this ground-breaking machine," said Jens Ennen. "To create a highly versatile crane that is suited to job sites around the world, it was important for us to focus on specifications and load-charts. Customers can expect high utilization rates with this crane too, as we anticipate excellent reliability. We are expecting the GMK5250L to continue the success of other Grove introductions of recent years, such as the GMK6300L which is one of the most popular Grove all-terrain cranes of all time."