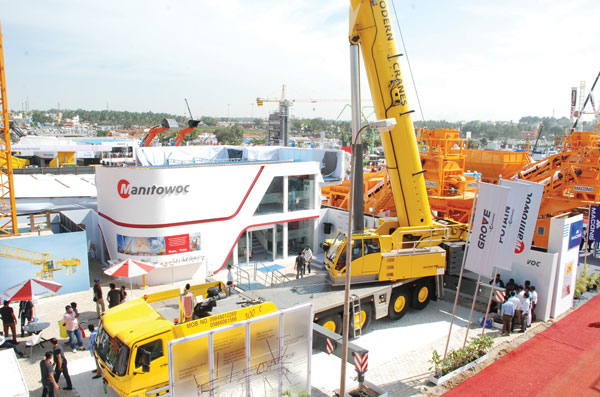 Excon 2015 was a busy show for Manitowoc, with an estimated 1,000 visitors stopping by the company's booth over the five-day show. The company displayed two of its leading cranes for the Indian market, completed some important sales, and paid tribute to a number of its most important customers.

"Overall, we are pleased with Excon 2015, which reflected the optimistic mood in India's construction market. We welcomed many customers and completed a number of sales at the event. We also met many new customers and interestingly received inquiries for a number of cranes we don't usually sell in India. We believe this demonstrates the maturing of the Indian lifting market, as well as highlighting Manitowoc's reputation for its ability to provide a lifting solution for any need,” he says.

Attracting visitors on to the 484 sq.m Manitowoc booth were the Potain MCT 85 tower crane and the Grove GMK6300L all-terrain crane. The MCT 85 is built at the Manitowoc factory in Pune and the topless unit is an update of the traditional saddle jib design MCi 85 – one of the most popular tower cranes in India ever. The Grove GMK6300L, meanwhile, is a 300 t capacity, six-axle mobile crane and one of the world's best-selling six-axle mobile cranes, manufactured in Manitowoc's Wilhelmshaven, Germany facility. Local crane rental company Modern Cranes owns the unit that was displayed at the show.

Aside from continuing discussions with existing customers and presenting the company to new customers, Manitowoc was also able to complete two orders during Excon 2015. Both deals were for the sale of Potain MCi 85 cranes. 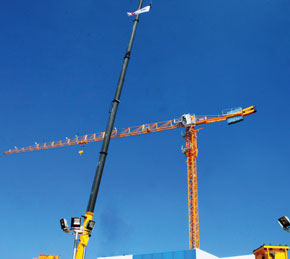 Other prominent customers were recognized during the show by Manitowoc, with each receiving a unique crystal plaque. In all, some 30 presentations were made over the course of the trade show.

Among the most significant presentations was one to Amin Ladha, the owner of Modern Cranes, which provided the GMK6300L for display at Excon 2015. A long-time Grove user, Modern Cranes also runs a GMK5220 in addition to the GMK6300L, among the many all-terrain cranes in its fleet.

Another local company, Sobha Developers, was recognized for its ongoing commitment to Manitowoc. Senior vice president of real estate, Shrikant Kulkarni, was on hand to receive his company's plaque which recognized the 32-strong fleet of Potain MCi 85 cranes the company has purchased.

Meanwhile, Sai Infra Equipments, another Bengaluru company, was presented with a plaque of appreciation for its ongoing investment in Potain MCi 85 cranes. This company currently operates a fleet of 12 units. The company's owner, K Ilango, attended Excon 2015 and was presented with the plaque.

From Kolkata, Arvind Saraf owner of Sugam Infra, was also presented with a recognition plaque. The equipment rental company features Potain MCi 85 and MC 125 cranes among its fleet.

Aside from its crane display, Manitowoc also featured parts and services provided by its Crane Care aftermarket operations.