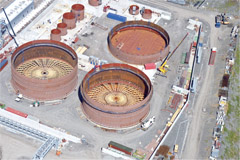 A team of nine Grove mobile cranes and three Potain tower cranes is playing a central role on one of the largest power projects in the Indian Ocean. The 220 MW Port East diesel-fired power station on Reunion Island is two years into construction, and the cranes are working among a network of pipes and infrastructure placing high-cost, high-tech materials.

All the cranes are owned and operated by local rental company Grues Levages et Investissements. Energy giant EDF is the main contractor and international engineering firm MAN is managing the project.

The strength and maneuverability of the Grove and Potain cranes are key reasons for their selection, along with their international reputation for quality, according to Thierry Blondeau, general director at GLI.

"The project layout means the cranes need to make numerous heavy lifts at different heights and in different locations," he said. "The cranes are working in tight spaces and lifting expensive materials. We need to have confidence in our cranes and load control is vital in ensuring there are no mistakes. So far the project is moving ahead of schedule."

The complexity of the €5oo million power plant requires intricate installation of heavy loads. Several of the lifts require multiple cranes with the most complex requiring four cranes working together. 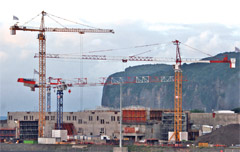 One of the most challenging parts of the job so far was erecting two 54 m tall chimneys, each consisting of six separate exhaust ducts inside a lattice structure. Each exhaust duct was comprised of four sections, measuring up to 18 m and weighing up to 155 t. Each section was lifted to the top of the lattice structure and carefully lowered into position through the structures' small opening.

Another major task was installing six urea tanks. These huge single-piece tanks weighed 20 t and measured 20 m tall, and were off-loaded from oversized flatbed trucks. They were then lifted from the horizontal to vertical before being secured in position.

The crowded site tests the cranes' maneuverability and their operators' skill. The all-terrain cranes, which range from the 35 t capacity two-axle GMK2035 to a 220 t capacity five-axle GMK5220, drive into positions with clearances as low as 25 cm. Some lifts also require the operators to reach 60 m over surrounding structures, where the smallest error could be extremely problematic.

With German, Spanish, Czech and other languages spoken on site, communication between the 150 workers and crane operators is crucial. Coordinating the position and capabilities of the 12 cranes is also a major challenge with so many working in close proximity.

In addition to the man-made challenges at Port East, the project must overcome challenges from the natural environment resulting from its coastal location and the fact that it sits in a cyclone zone. The weather can change at a moment's notice with strong winds and torrential rain reducing visibility or even causing landslides.

The cranes have been on site since June 2009, and will remain until the project finishes in early 2014. Most operate for 10 hours a day, six days a week, and some occasionally work 24 hour shifts. Such a demanding schedule requires high levels of concentration and focus.

The Port East power station will help Reunion Island meet the growing needs of the island's electricity demand. It will be driven by 12 diesel engines of 18.3 MW each for a total capacity of 220 MW. The facility will provide power for around half of the island's 800,000 inhabitants.