Chunjo has added the 2,300t (2,535 USt) crawler to its rental fleet and will supply it to contractors around the globe, including those working on nuclear power plants. The crane's first job is at Posco E&C plant in Gwangyang, South Korea, where cutting-edge technology is making liquefied gas from low-grade coal. There, the crane is making 12 lifts for three of the plant's vessels and is setup with 55 m of boom and a 60 m luffing jib. 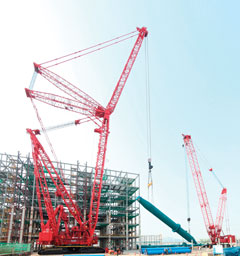 Chang HwanJang, chairman at Chunjo, explained why the company got so attracted to the 31000's VPC system, "The Manitowoc 31000 has a tremendous capacity and we will be able to use it for heavy lifts on a diverse number of projects," he said. "But the real advantage is the crane's VPC, which will keep the footprint of the crane manageable, giving us more space to work on the job site."

In fact, Chunjo owns more Manitowoc 18000s than any other company in the world. And that's not the only superlative it holds rights to - the company owns more Grove rough-terrain cranes than any other in the Far East.

With such a large fleet, it's no surprise International Cranes and Specialized Transport ranked Chunjo as one of the world's 50 largest crane-owning companies on its IC50 list.

Ho JoonBang, vice chairman at Chunjo, described the special relationship between his company and Manitowoc, "The partnership between our two companies dates back many years and I can attest that Manitowoc makes the best cranes in the world, whether it's Grove, Manitowoc or Potain," he said. "This new Manitowoc 31000 is making its first lifts at the very same site as our first Manitowoc 18000, so it's a very important and symbolic milestone for Chunjo."