A Manitowoc 21000 crawler crane is playing a crucial role on the $8.2 billion Air Warfare Destroyer project currently underway in Adelaide, South Australia. The crane was chosen as it is one of the few high-capacity cranes in the world that can tackle the work to erect massive pre-fabricated hull sections. Some of the sections being lifted weigh up to 250t, and in total the crane will help assemble three advanced warships for the Royal Australian Navy. 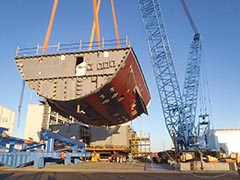 The 907t capacity 21000 is fitted with the MAX-ER capacity enhancing attachment and was delivered to ASC, Australia's largest defense shipbuilder, in November 2010 after a six-week voyage from Maryland in the U.S. The crane was assembled by skilled Manitowoc Crane Care engineers before starting work. It will remain at the shipyard until the building work is complete.

The crane is lifting entire sections of the new ships from their transport supports onto specially designed cradles where they are pieced together. This "blocking build" method not only requires high capacity, but also finite precision as each block must be positioned in exactly the right place, as Kelvin Kent, general manager for Manitowoc in Australia, explains. 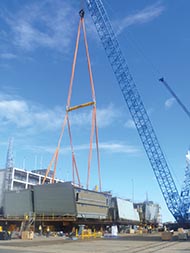 "The 21000 is immensely powerful, with some features of the most advanced technology that give operators delicate load control and precise maneuverability," he says. "This means that even the largest structural components can be placed exactly where they need to be. It also reduces the risk of a collision and the chances of causing damage to the components, which would add time and cost to the project."

One recent lift at the project involved a 200 t block that was lifted, rotated and aligned within an accuracy of 2mm – an impressive feat considering the section measured 18m by 12m by 7 m. The entire operation took an hour and a half to complete.

Each Air Warfare Destroyer is 146 m long, 18 m tall and weighs more than 6,500 t. So the right crane for the job had to offer both reach and strength. The 21000 has 109 m of main boom in its standard configuration, but with the MAX-ER attachment, it can be fitted with up to 146 m of main boom. The crane is also working with a specially configured sling that ensures the over-sized loads remain level when in the air.

Although a very large crane, the 21000 has a relatively small footprint of just 14.5 m x 14 m with a tail swing of 18 m including the MAX-ER attachment. This makes it ideal for working at the busy and confined shipyard.