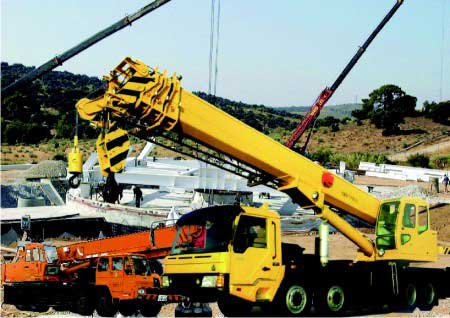 Truck mounted telescopic cranes are beginning to find acceptance in India. This is owing to the inherent advantage possessed by the machine of being a single unit. However, effective concept selling on the utility of the machines by the manufacturers and distributors would make them better accepted P. P. Basistha reports. 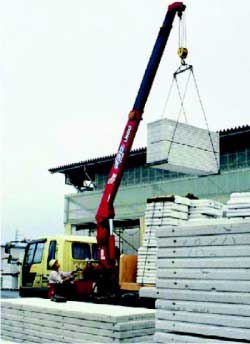 Truck mounted stiff and knuckle boom telescopic cranes are making inroads in India to cater range of lifting requirements both for construction and manufacturing industry applications. The demand is led by users, on the backdrop of knowledge on the utility of the machine of being a single integrated equipment which can both lift and transport the cargo between various loading and unloading points. Nonetheless, modification in certification regulations by the Government and pricing is likely to make the equipment popular in the near future.

As Mr. Arjun Chowgule, Senior Manager, Chowgule Cranes explains, “being a single machine, the truck mounted telescopic cranes are providers of end to end solutions beginning from loading-unloading and transportation across industry segments.” He adds, “the second advantage of these integrated machines that they greatly check any possible idling of both the crane and truck as they work in tandem, undertaking both lifting and transportation functions. This in turn makes equipment availability optimum with the users, consequently cutting down on fuel, labor and time costs.”

Chowgule Furukawa, which is the exclusive distributor of Furukawa truck mounted stiff boom telescopic cranes in India, offering lifting solutions from 2-8 tonnes capacity range, depending on the individual requirement of the projects. Chowgule also distributes tractor mounted stiff boom Furukawa telescopic cranes with a lifting capacity from 2-3 tonnes. The tractor mounted crane has been finding its applications in rural areas with loose soil, where it is hard for truck mounted cranes to make an access. Chowgule-Furukawa cranes have been used by prominent construction companies in India.

On the advantage, a truck mounted crane can offer, the Chennai based company ETA Star informs, “the truck mounted cranes ensure a faster turn round times during loading and unloading operations since the truck crane can self load and unload even for load droppings at different locations without waiting for crane or a manual labor to come and unload the cargo. Faster truck fleet turn round is most important in case of fleet loads. The other advantage is, unloading is possible at larger radius and heights depending on the selection of the crane mounted on the truck.”

While the truck mounted crane has its advantages the reason for modest acceptance of these equipment in the country, manufacturers and distributors feel is due to deficient value engineering on the trucks available in the country, not making them essentially ideal for mounting the crane. As Mr. Rajesh Sharma, Chief General Manager Sales, ECEL, points out that, “the telescopic truck mounted or knuckle boom cranes has been finding modest acceptance as popular trucks in India are much basic in technology. This makes it essential for the crane manufacturers to carry out necessary value engineering on the truck to suit to lifting applications which makes the cost of the equipment higher.” 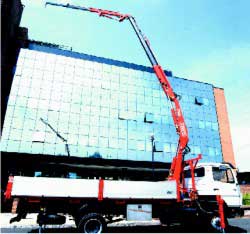 Similar views are shared by Mr. Shrinivas, Director, Hiab. He mentiones, “In Europe or USA the truck manufacturers or dealers are also the suppliers of the crane mounted on the truck as a single unit, which they do at their behest through necessary value engineering. This is a practice much contrast in India, where the crane buyer has to buy the truck and get it fitted through a local body builder, who mounts the crane basically on guess which goes on to make the cost of equipment higher.” However, Mr. Srinivas tells, “to provide necessary value engineering to the product, we do scientific engineering on the product, aided by proper software support to build up the design which makes the equipment fatless during the course of its application.” Hiab has loader cranes with a lifting capacity 1–92 tonnes with an out reach between 2–30 metres.

However, on the way to minimize the requirements of value engineering, the silver lining is that, as of now various truck manufacturers in the country have started manufacturing modern multi-axle trucks in the country which are finding due acceptance in the market. The trend is likely to correct the “truck to crane” price ratio and is likely to help in making the truck mounted cranes popular in the near future. 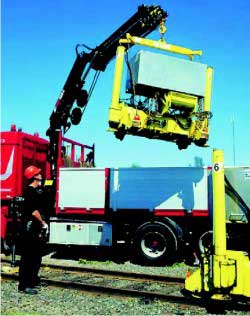 While pricing has been a necessary impediment for the cranes to find greater acceptance, deficient transparency in ARAI certification has been a deterring factor in making the Truck mounted cranes wide acceptable. As per this, the RTO regulations and fees vary from state to state. In most of the states, the RTO’s insist on an ARAI certificate of approval for fitting the particular crane model and variation on any make/model of the truck. This becomes cumbersome since each model of crane would have three to ten variations of boom length or other features. Each crane manufacturer may have about 10-12 models of cranes that can be fitted on the standard Indian makes and models of trucks. Effectively this would mean that a crane manufacturer has to submit a crane fitted on a specific truck to get an ARAI certification and he necessarily have to provide each of his crane model and variations thereof to ARAI with different makes and models of trucks to get the ARAI certification for his full product range. Owing to the cumbersome process involved, potential buyers of the truck mounted crane bypass purchasing the equipment, which on a broader part has in turn lead to its slow acceptance in the country. The process needs to be corrected for wide acceptance of the equipment.

While on economics, though the initial costs of a truck mounted crane is on the higher side while the long–term operating costs for fuel, manpower, truck availability factor etc are cost effective. Else– where in the developed world, the truck driver is also the truck owner and crane operator and hence likes to keep his truck availability very high instead of waiting for the cargo loading-unloading.

The crane mounted on the truck help to keep the truck moving for longer times which earns him higher revenues. The concept is catching up with Indian corporates who recognizes the effectiveness of saving time and labor costs at work sites while constant stream of loads of different weights and sizes. However, to disseminate the information on the advantage offered, effective concept selling of the equipment has to be done by manufacturers and distributors of the truck mounted cranes in the country. This will lead to increased usage of the equipment, all to provide better work margins.

Truck mounted telescopic cranes cut down on fuel, manpower requirement and increased truck availability added to the features of faster mobility as compared to a pick-n-carry cranes despite higher initial investments.