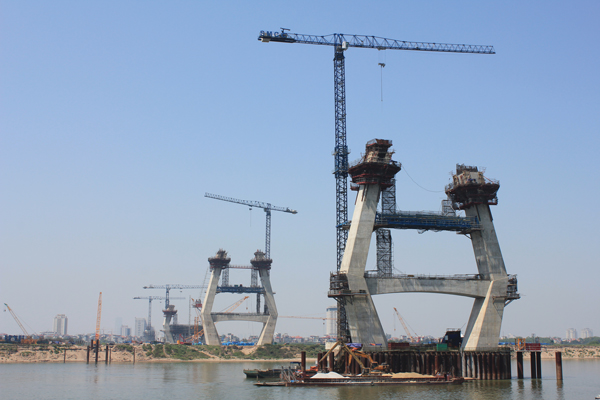 The capital of Vietnam, Hanoi, will have by the end of 2014 a new road connection between the city centre and the Noi Bai International Airport. The pathway of this new 8-lane-road, four for each direction, crosses the Red River. To save its 1,200 meters of width, Vietnam’s Ministry of Transportation launched a project of a spectacular cable-stayed bridge and approach viaduct of 3.080 meters in total length.

A Joint Venture formed by Japanese firms IHI Infrastructure Systems and Sumitomo Mitsui Construction, is in charge of the construction of the "Nhat Tan Bridge", which is also known as the Vietnam-Japan Friendship Bridge. 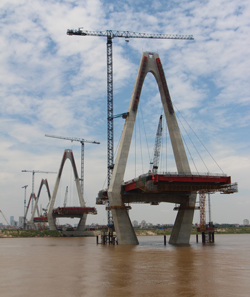 The main part of the bridge, 1,500 metres in length, will feature five A-shaped concrete pylons, to which the clamping cables will be tied. The construction of these pylons, located every 300 metres along the bridge, has been done by five 21LC550 18t tower cranes, supplied to Sumitomo Mitsui Construction by Asia-Ted, a dealer of Linden Comansa in Singapore.

The initial assembly of the five cranes, as well as some jacking-up operations, was carried out by a team of Linden Comansa’s technicians, who exceptionally moved to Hanoi from Spain to attend this sophisticated operation. All pylons are practically of similar dimensions, so the cranes were erected with the same settings: jib length of 50 metres and 11 tower sections, to reach a freestanding height of 63.8 metres. In addition, each one of the cranes was erected on foundations over four steel piles driven to the ground, giving the crane a further height of between 5 and 11 metres, depending on the location of the pylon.

The erection of three of the five cranes was especially complicated, as the pylons were completely surrounded by the water of the Red River. The lifting of the sections had to be done by crawler cranes located in barges in the river, which made the maneuvers more difficult the days in which waters flow down at high speed. In addition, the need to transport material and sections on barge demanded a large planning and slowed down the erections tasks.

As the pylons were being built, each one of the cranes had a first tie at a height of 31.1 meters (after the sixth tower section), and using a hydraulic cage, each 21LC550 was climbed to a height under hook of 85.8 meters (15 tower sections). Months later, they had to be tied for a second time at a height of 60.6 metres (after the 11th section) and another climbing allowed the cranes to reach a final height of 107.8 metres (19 tower sections), which together with the height of the foundations, allowed the cranes to reach high enough to finish building the pylons, between 109 and 111 meters high. As all of the cranes had the same D33 mast section, which is 2.5-metre wide, only two hydraulic cages were necessary to perform all the jacking-ups, which meant a significant economic saving.

The five tower cranes have worked at the jobsite since 2009, raising all the necessary materials for the construction of the pylons, such as formwork, prefabricated rebar cages, concrete, etc. The 21LC550 have also helped to unroll and place the cables of the bridge, as well as to raise the cable anchor boxes to the top of the pylons. These 29 red pieces of anchor boxes per pylon, which have been directly embedded into the concrete, weight a maximum of 18 tons per piece, forcing the cranes to employ 100% of its maximum load capacity.

The chosen hoisting mechanism for each of the five cranes at the jobsite was the optional 65 kW, which allows speeds of up to 220 meters per minute, very suitable for this type of project. In addition, the easy manoeuvrability of the crane and its great precision to locate the load in place, have facilitated a fast and agile construction.

During the project execution, the tower cranes were equipped with Obstruction Lights for air navigation and lightning protections to provide safe circumstances for the work force.

The construction of the five of the pylons and the connection of steel bridge decks between the three pylons has finished recently. The work of jacking-down and dismantling of the cranes has already started. These tasks, especially when dismantling the ties, are critical because the cranes are very close to the expensive cables that hold the bridge, and any small impact could damage them badly, forcing the management to either repair or replace the complete cable. 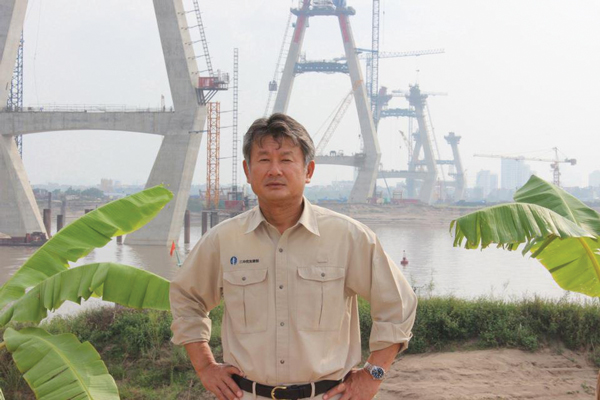 Project Manager Mr. Hitoshi Yamaji, from Sumitomo Mitsui Construction Co., Ltd., showed his satisfaction with the performance of the cranes: "The five 21LC550 tower crane worked well during our pylon construction without any trouble. In addition, the maintenance and technical support by their well trained technicians were satisfactory. We got the best decision by choosing Linden Comansa cranes for our construction works; otherwise, I think it would have been difficult for us to complete our project on time".

The "Nhat Tan Bridge" is expected to open in October 2014, after 60 months of construction, just in time for the 60th Year Anniversary of Hanoi Capital Liberation Day.