Linden Comansa Tower Cranes at the "Route of the Sun”

To promote the competitiveness of Colombia and improve the country's infrastructure, the Colombian Government has declared of strategic importance up to 11 roads. Among all of them stands out the "Route of the Sun", a highway with a length of 1,071 km (665 mi) which will bring nearer the cities of the interior of the country, including the capital, Bogota, with Barranquilla, one of the main ports in the Caribbean. The project, one of the most ambitious in Latin America, has a budget of more than 2,500 million dollars (around 1,800 million Euros) and will reduce the car journey between Bogota and Barranquilla from the current 18 hours to just 10.

Helios Consortium, formed by CAS, IECSA, ConConcreto and CSS Constructores, has been chosen to manage and build the Sector 1 of the "Route of the Sun". This is the shortest of the three stretches that make up the highway, but also the most complex, since it will cross the Colombian part of the Andes range, a very mountainous area with many rivers and gorges. Therefore this sector, only 78 kilometers (48 mi) in length, will feature nearly 3 km (1.8 mi) of tunnels and up to 6 km (3.7 mi) of bridges and viaducts. 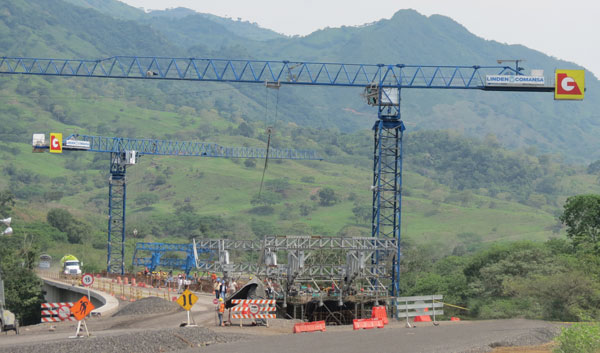 For the construction of the bridges, the Consortium has six Linden Comansa tower cranes, operated by Gigacon, official distributor of the Spanish manufacturer in Colombia. These tower cranes, a 21LC400 18t, two 21LC210 18t, a LC5211 5t, a 10LC140 8t and another crane of the same model that is about to arrive at the jobsite, are responsible for building a total of 7 bridges on this section, so when they end up on a bridge, they are disassembled, transported and erected again at another point to start with another bridge. Due to the demanding work schedule, some of these cranes work in a double shift, always responding very efficiently.

According to Fabio Cañón, Sales and Technical Director at Gigacon, "one of the biggest difficulties we have faced was the transportation to the rural area of the Magdalena Medio, which is crossed by this Sector 1 of the "Route of the Sun". It is a rather rugged and unpopulated area, 100 kilometers away (62 mi) from Bogota, and the current road doesn't precisely meet the best conditions. For the erection of the crane we couldn't count with heavy mobile cranes, but thanks to the lightweight of the tower crane's sections, we were able to erect them spending a little more time than the usual. In addition, the high temperatures in the area (32 degrees Celsius / 90 degrees Fahrenheit is the annual average) added another problem to our team's list when doing all the assembly works."

Gigacon, Linden Comansa's official distributor in Colombia since 2010, is also responsible for the technical support and maintenance tasks on the cranes at the jobsite. Due to the distance to any urban location, Gigacon has a permanent maintenance team at the jobsite, able to quickly respond to any electrical, mechanical or equipment maintenance problem. Gigacon also managed the training of the crane operators, staff selected from among the inhabitants of the area in an example of social responsibility from Helios Consortium. Gigacon has over 35 years of experience in the sector of construction and load lifting, and owns one of Colombia's most important fleets of cranes and lifting.