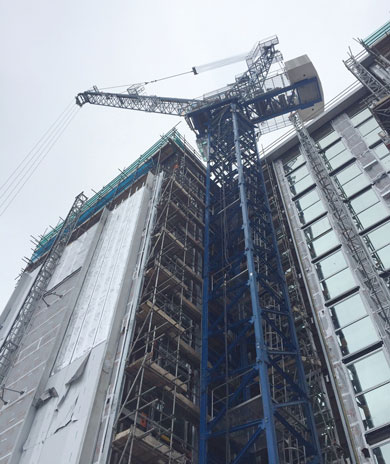 Linden Comansa, as in the previous editions, will exhibit along with Linden Comansa America (LCA), the manufacturer's exclusive North American distribution and service company. The group's booth location is G-2789 in the Gold Lot of the outdoor exhibition area. Visitors to the booth will be able to learn about the LCL310 luffing jib crane — the first time a luffer has ever been displayed by Linden Comansa in the Americas. The group will also highlight other cranes and new developments leading up to ConExpo:

Making its first appearance ever at ConExpo, the LCL 310 luffing-jib tower crane comes in three versions: 12, 18 and 24 tonnes. Its máximum jib length is 60 metres, allowing different jib configurations for maximum reaches every 5 metres. This luffing-jib crane, with a compact design and reduced out-of-service position is ideal for use in cities or congested job sites.

Although not displayed in Las Vegas, the LCL700 luffer will be another good reason to visit Linden Comansa's booth. This new model, the largest luffing-jib crane in the Linden Comansa lineup, will be officially launched just a few weeks before ConExpo and will be offered in 50 and 64 tonne versions. The virtues of the LCL700 make this crane to fit perfectly in the US and Canada markets, as well as in the large cities of Latin America. Therefore, Linden Comansa expects to receive many information requests from the ConExpo attendees.

Large flat-top tower cranes have been traditionally most common in North America, and also Linden Comansa's most successful in the region. Therefore, the 21LC335 and 21LC550 models will be highlighted during the show, as they have been recently upgraded and optimized to load up to 20 and 25 tonnes respectively.

The 21LC450 crane is another recently developed flat-top model with a good reception in the North American market. Linden Comansa will be spreading this model, with maximum load capacity of 25 tonnes, of which some units have already been delivered to the West Coast.

The 3000 Series of flat-top tower cranes consists of two models with heavy maximum loads, from 32 to 90 tonnes. These cranes cover the necessities of the industrial and infrastructure construction market, not only in the Americas but in the entire world.

The LC1600 Series features an integrated tower top and counter-jib into one component. With maximum loads from 8 to 12 tonnes, its three models are already having a strong entry in many Latin American countries.

With a wide variety of recently introduced Linden Comansa models, the ConExpo visitors will have more equipment choices to select from to better meet their next project or their local market needs — whether from North or Latin America, where the majority of trade show visitors will be from.