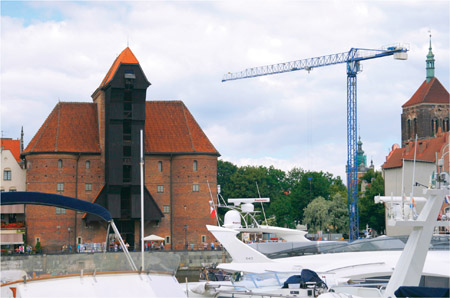 One LC5211 crane builds the extension of the Polish Maritime Museum, in the city of Gdañsk, near an XV century port crane.

Corleonis, exclusive dealer of Linden Comansa in Poland, has rented a LC5211 crane to the construction of the Maritime Culture Centre, an extension of the Polish Maritime Museum in Gdañsk, the largest seaport in the country. The new building, with an estimated 12 million Euro budget, will open in spring 2011 and will house modern facilities for temporary and permanent exhibitions, workshops and offices. The exterior design will follow the line of the surrounding buildings, part of the historic Old Town.

An LC5211 crane from Linden Comansa is being used for the construction of the Museum's new wing. This model has a maximum load of 5 tons, and can lift up to 1,100 kilos at the end of the jib. In Gdañsk, the LC5211 has been erected with a 3.8 meter wide cross base, 31.9 meters of height under hook, and a jib length of 37.5 meters, although with another configuration it could exceed a free standing height of 45 meters, and have a jib length of 52.5 meters. 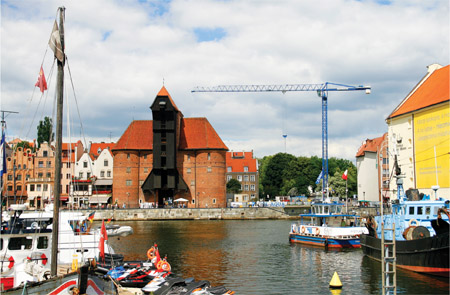 The new Maritime Culture Centre, is being built near the Zuraw. A port crane from the XV Century is not only part of the Museum, but also one of the city’s most representative monuments. The crane, built between 1442 and 1444 to substitute a previous one that was destroyed in a fire, had also a defense function, as it was an entrance gate to the city. The building consisted of two brick towers with a wooden structure in between, where the lifting mechanism was located. The lifting labor was done with four large wooden wheels, put in motion by port workers. The current Zuraw is a reconstruction of the original, which was almost completely destroyed at the end of World War II.