Linden Comansa Hooks up with A Tall Swede 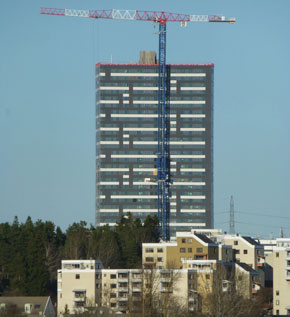 Kista Torn is Stockholm's tallest residential tower
Photo by Stefan Eldeby
Construction company JM Sverige is about to finish the Kista Torn ("tower", in Swedish), a residential building located in the district of Kista, in Stockholm, the capital city of Sweden. The complex is formed by the 120-metre-high Kista tower (35 floors) and the smaller K2 building (15 floors), which both together will house 362 apartments.

Both cranes first collaborated in the construction of thick concrete walls in the basement of the building. Soon afterwards the 21LC750 48t started with the rising and positioning of the prefab walls that shape the building. From floor 8, both walls and floors were all prefabricated allowing the crane to build each floor very fast. The 21LC750 always worked three floors ahead of a team of workmen who set the electrical and pipe installations and used a concrete pump to fill the floors, leaving always two empty levels between the tower crane and the workforce for safety reasons.

When the building gained in height, the Edins Byggkranar erectors team jacked up the 21LC750 crane with the hydraulic cage up to 78 meters. To reach the final height of 132 metres, the 21LC750 had to be tied once to the building, and had to be jacked up four more times. To ensure an optimal performance at such height, and with heavy loads of up to 22 tonnes, the crane was delivered with the optional 110 kW hoist motor that allows speeds of up to 88 metres per minute. Also, although it was not necessary for the Kista tower, Edins Byggkranar ordered the crane with the optional high capacity Lebus drum for 1,450 metres of rope, to be used in upcoming projects.