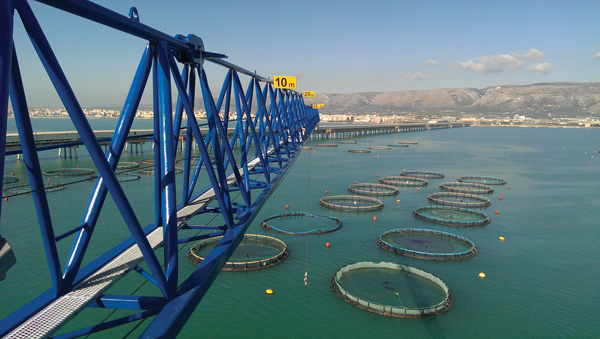 Manfredonia is a small coastal town in Italy, situated close to the Gargano promontory in the province of Foggia. Much of its economy is based on fishing, and its fishing fleet is one of the largest in the Adriatic Sea. In addition to the fishing port, Manfredonia has also an industrial harbour of almost 3 km in length, at the end of which the facilities of "Gargano Pesca" are located. The activity of this company is the aquaculture (or aquafarming), for which it has 40 floating cages for breeding species such as Seabass, Gilthead Seabream and Corvine, as well as a long-line for farming Oysters, Mussels and Clams about a mile away from the port. 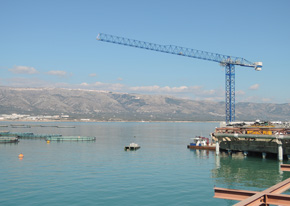 Since the beginning of 2015, "Gargano Pesca" has a Linden Comansa 16LC185 Flat-Top tower crane with maximum load capacity of 12 tonnes. Every day, this crane is indispensable for the transhipment of containers with 10 tonnes of food to the cages that "Gargano Pesca" installed in open sea and that annually produce about 1,200 tonnes of fish. The breeding period lasts an average of 2 to 2.5 years, during which the Linden Comansa 16LC185 tower crane also contributes to the loading and unloading of all equipment for the operation and maintenance of the nets, the clamping system of the product for sale, etc.

The 16LC185 tower crane is erected at the port, about 5 meters above the sea level, over a 4.5-metre-wide base, with height under hook 20.2 metres and jib-length of 45 metres. The crane has a special protection for marine environment named C4M, and wasn't shipped with a cabin, as the operators need great mobility and visibility of the harbour, for which they operate the crane with a radio remote control.

According to Dino Dorigo, Linden Comansa's Area Manager in Italy, the 16LC185 12t is probably the largest tower crane sold and delivered in the transalpine country in the last year.