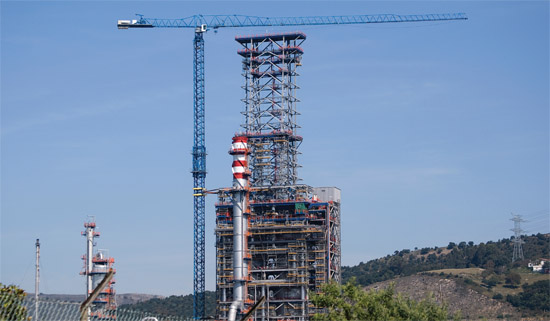 Petronor, subsidiary of Spanish oil and gas company Repsol, is almost done with the works at the refinery of Muskiz (Spain). Since 2008, the company is building in its facilities an FRU ("Fuel oil Reduction Unit") Plant with the help of a Linden Comansa 21 LC 550 tower crane with 18 tonnes of maximum load.

The crane is property of company Duro Felguera, specialized in industrial and energetic projects, that forms with Imasa and Cotinsa the temporary consortium that is in charge of the project. Linden Comansa's official dealer ALGRUSA, has carried out the erection of the crane, as well as the planning and execution of the different jacking-ups.

The 21 LC 550 18t works with a jib length of 80 meters, and its final height under hook has been 120 meters, for which it needed two tie frame collars and 94,500 kilos of ballast on the 6-meter-wide folding cross base. The work of the crane is focused on the construction of a petroleum coke plant, where it is lifting and assembling pipes, support elements and different structures.


With these new facilities, Petronor wants to reduce its fuel oil production, and increase the production of other fuels such as gas, propane, butane, gasoline, coke, etc. This change is mainly due to the progressive decrease of fuel oil demand, which is used especially for the maritime transport and industrial uses, whereas the rest of fuel, especially the diesel oil, have increasing demand up to such a point that most of the product has to be imported from other countries.

For this important adaptation of the refinery, Petronor has invested around 835 million Euros (around $1,160 million). The petroleum company also thinks that the construction of the new plants have generated around 1,500 jobs, and when the project is finished, 100 direct jobs and around 240 indirect jobs will be created.