Linden Comansa and BKL Team up Again for bauma 2016 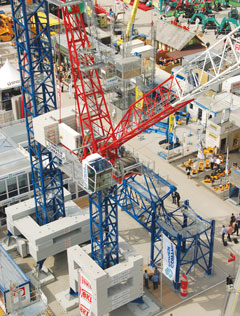 Tower crane manufacturer Linden Comansa and German dealer BKL Baukran Logistik GmbH will exhibit together at Bauma 2016, the world's largest and most important construction machinery trade show, to be held in Munich, Germany. It is for the second time that both companies would present their products and services at a common space at the New Munich Trade Fair Centre, after the successful experience from the last edition of Bauma.

According to Alberto Munárriz, CEO of Linden Comansa, "exhibiting with BKL in 2013 brought more business to both companies while our partnership grew stronger, so teaming up again for 2016 is a wise and easy decision".

In 2016, Linden Comansa and BKL will share a total area of 784 square meters, which is the largest space ever booked by any of both exhibitors. Booth 1103/1, located in the open area, will host some tower cranes from Linden Comansa's wide range. BKL will show a selection of its products and crane related services in a welcoming atmosphere.

Five years of Spanish-German partnership
The co-operation of both companies started in 2011, when BKL bought its first Linden Comansa tower cranes. The first package of four 21 LC 290 and two 11 LC 160 succeeded the field-test that focused on the service and the spare parts supply, as well as on the cranes' reliability, which are key factors for BKL. According to the positive experience, BKL invested in further cranes.

BKL Baukran Logistik GmbH is one of Europe's largest crane rental, sales and service companies with more than 350 tower cranes and nearly 50 mobile cranes in its fleet. Headquartered in Munich, BKL is represented by further branch offices in Ingolstadt, Frankfurt and Hannover.