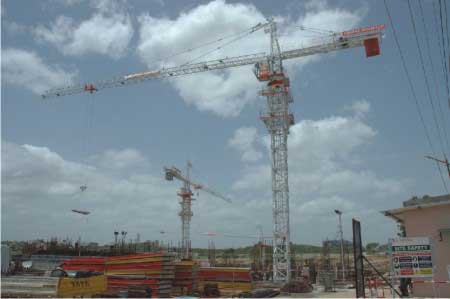 Heightened core construction, real estate, and industrial activity have provided a shot in arm to the earlier dormant cranes market in the country. And well led by construction boom, coupled with spreading knowledge on the utility of cranes application in construction, demand for cranes is well expected to remain at full pace in the coming years. P. P. Basistha reports.

India’s crane market is on a boom with the market reportedly growing at the rate of 100 percent. All obvious, robust construction activity has brought in the buoyant demand. As per the country’s construction fraternity and crane manufacturers, the dimension of the demand is much high, leading to a well pronounced mismatch in supply and demand/requirement of the cranes, with the latter completely outstripping the former.

As per crane industry sources, the situation is well likely to continue until the end of the country’s 11thPlan based on government’s big bang target of infrastructure creation, to sustain 9 percent GDP growth. Supply paucity would also coincide with the fact that order book of both the domestic and foreign crane manufacturers is already booked full until the end of the 11thPlan.

Under the present requirement of the construction industry, demand of cranes is well assorted for the country’s construction market. Quality infrastructure demand requirement has put in demand of diverse nature of cranes to meet customized construction and other demand requirement. In accordance with this, the market has a requirement of crawler cranes, truck mounted cranes, all terrain cranes, tower cranes, pick and carry cranes et al. with tonnage well classified. In terms of tonnage capacity the cranes market is classified into light capacity, medium capacity, and heavy capacity.

The light capacity comprises cranes with a capacity range of 70-80 tonnes, the medium capacity consists of 90-300 tonnes. While the heavy capacity involves cranes with a range of 350—2000 tonnes. As per crane industry sources, with the project size becoming bigger, both in core and industrial construction, cranes much more in demand are in the range of 1300-1400 tonnes capacity. However, there is also a market of 4000 tonnes capacity for certain niche construction job applications in the country.

On tower cranes bulk of demand is at the range of 6-10 tonnes. While demand in Pick and Carry cranes is 8-14 tonnes capacity and also getting momentun towards 18-20 tonnes capacity According to crane industry sources, the future market requirement would be characterized by demand of high capacity cranes, led by bigger project size and higher output by Government’s emphasis to create ultra mega power projects to meet the power shortfall, reported at 13 percent during peak hours. 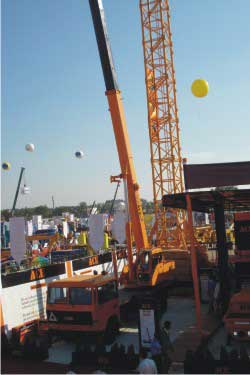 Requirement is also expected to come from windmill power projects. Cranes requirement for windmill projects would involve capacity of 350–600 tonnes. Demand of crawler and all terrain cranes would also grow from green and brown field expansion of refinery projects. However, demand from road construction projects is expected to remain modest. While demand of pick-n-carry or industrial cranes would be on a stronger note led by ongoing massive investments in industrial and SEZ projects.

A precise construction market, that would add buoyancy to the demand of industrial cranes would be led through brown field expansion of country’s large number of major ports in bid to containerize its operations under the country’s National Maritime Development Programme, involving an infrastructure investment of Rs, 60,000 crores. Pick-n-carry would also grow aided by large scale investments to create container freight stations and inland container depots led by buoyant export-import growth. The industry is also banking over airport projects.

Requirement of tower cranes would continue to be brought in by ongoing robust real estate construction. According to the recent findings of Associated Chambers of Commerce and Industry of India, India’s real estate market will expand from $16 billion to $60 billion by the year 2010. 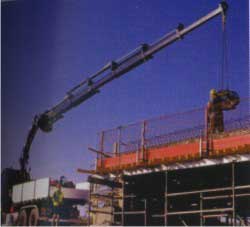 The Indian cranes market has a presence of both Indian and foreign manufacturers. Prominent foreign manufacturers consists of Hitachi, Kobelco, Liebherr, Sennebogen, Demag, and Sany. The concerned manufacturers produce high capacity crawler cranes. Hitachi-Sumitomo has a distribution tie–up with Telcon for marketing and distributing its cranes, while Kobelco has a distribution tie up with Voltas. German crane manufacturing major Liebherr has its own marketing setup. It imports cranes from its plant based in Germany. While Sany also has its own marketing setup. Presently, it imports its crawler cranes from China.

Other foreign manufacturer consists of Zoomlion and XCMG of China and Manitou of France. Zoomlion has its tie up with Action Construction Equipment (ACE) for marketing its tower cranes. XCMG also has a distribution tie up with Lanxin Engineering for its truck mounted mobile cranes. While Manitou has a marketing collaboration with Godrej for marketing its material handling telescopic cranes.

The Indian cranes major has a distribution tie up with Weihai Huata Building Machinery of China for marketing its wide range of tower cranes for the Indian market. Huata cranes are available in three series and 12 varities with the option of different type foundation to cater to the diverse demand of the construction industry. ECEL has sold 49 tower cranes ever since it entered into the marketing agreement with the Chinese company. ECEL also has a distribution agreement with IHI Construction Machinery of Japan for marketing its hydraulic crawler cranes in India. The IHI crawler cranes are available from 50 tonnes to 280 tonnes.

While bulk of foreign crane manufacturers has a marketing agreement with Indian companies. Certain manufacturers have technical collaboration agreement. This comprises Furukawa’s tie up with Chowgule for installing its telescopic cranes on truck and tractors for various construction and industrial application, and Austrian crane major, Palfinger’s collaboration with Dubai based ETA Star Western Auto for its knuckle boom crane. Western Auto manufacturers auxiliary pumps, pump brackets, propeller shaft and sub frame for Palfinger.

However, though most of the foreign manufactures have distribution agreement with Indian counterparts, but bulk of the manufacturers are looking for technical collaboration with Indian companies, having strong engineering skills, to attain increased product localization and resultantly price competitiveness.

While the Indian construction market provides a bonanza of opportunities to crane manufacturers, at the same time it offers its own challenges as well. This comes for manufacturers while undertaking business development in making the users understand the application and utility of the machinery. Challenges galore also in terms of percolation of substandard equipment in the market. This has been due to paucity in availability of quality equipment led by massive demand. Non-availability of equipment, as per industry sources, have made used crane dealers get mileage out of the situation. This has made users compromise with safety and productivity aspect.

Challenges also are in place to attain localization as research and development, designing and components availability have to be streamlined. Skilled manpower shortage is to operate the equipment is also an issue, as this does not allow optimum utilization of the equipment.

Sanghai Movers one of the largest hiring companies in India with a fleet of 280 cranes and to acquire another 100 cranes in a next 12 months has started a course for crane operators to plug skill shortage. It has a plan to setup an Academy, offering a Diploma in cranes operation and cranes safety. The Academy is also exploring the possibility of the tie-up with institutions overseas (for details refer to news section of this issue).

While the market has thrown a wide opportunity for the manufacturers, for the sustained growth of the market, it would be quite essential for the manufacturers, coherently to disseminate knowledge for the equipment. In tandem, it would also be pertinent to ensure the physical availability of the equipment along with financial availability for all round development of the country’s cranes market.