New LTM 1750-9.1 mobile cranes have been leaving the Liebherr plant in Ehingen for the last few weeks. One of the very first machines was collected by Bergheim-based Breuer & Wasel. The new crane was driven from the factory site straight to the north of Germany where it erected four wind turbines each with a capacity of 3.4 MW and a hub height of 78 metres near Brunsbüttel.

The market was eagerly waiting for this large mobile crane. Two months after the delivery of the prototype there are already a dozen machines in use. This year alone Liebherr plans to supply around 40 LTM 1750-9.1 machines to its customers. Equipped with a 52 metre telescopic boom which it carries around permanently and a maximum load capacity of 750 tonnes, this modern crane supplements the Liebherr range between the almost legendary LTM 1500-8.1 and the powerful LTM 11200-9.1. 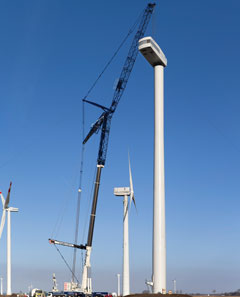 "I've found the crane to be superb," says crane driver Daniel Decker about his new tool after working for a week in the new wind farm. Prior to this, Decker and his colleague Michael Michatz had driven the nine-axle machine clear through Germany. "You can drive it like a car" continues the experienced crane driver after his lengthy 800 kilometre trip on autobahns and national routes.

On the site, the 750 tonner quickly impressed the two crane drivers as a result of its good handling and fast setup times. "During the setup process, it stands perfectly on three supports", says Decker. The crane travels on roads with only its front supports. It fits its rear ones at the site by itself. It has an auxiliary support at the rear for this purpose.

The crane team and fitters only need around two working days to erect a complete wind turbine with a hub height of 78 metres and a rotor with a massive diameter of 104 metres. The crane scores very heavily for moving to the next site. Only the luffing jib has to be removed back to the pivot sec-tion. The supports, guying, telescopic extension and 54 tonnes of ballast are left on the crane. If the roads and tracks are perfect, even the maximum ballast of 84 tonnes can remain on the crane.

"We need around one-third of the time required to move a comparable lattice boom crane," says Jürgen Oprée, Technical Manager at Breuer & Wasel. "The crane has absolutely delighted our customer. He loves the fact that it takes so little time to move it and has already promised follow-up orders."

The conclusion from its trial in wind power is extremely positive for the new Liebherr LTM 1750-9.1 mobile crane. This flexible, powerful crane is the ideal erection machine for wind turbines on the coast with low hub heights.