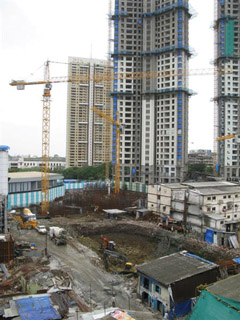 The twin towers of Orchid Heights will both reach a height of over 300 metres and have 80 floors when they are completed in 2013.

The construction has just started on the infrastructure which is beginning to rise from the foundations, and Man Infra has installed the 200 EC-H 10 in the lift shaft of one of the towers, from where it will handle the lifting for both structures.

Project manager on the site, Mangesh Chavare says that with its 60m jib, the Liebherr will cover the footprint of the two towers.

He adds that two smaller non Liebherr cranes are also being used on the site to construct the complex's 13-storey podium and other elements, and this has necessitated a close flyover for the 200 EC-H 10 jib and one of the other cranes during the earliest stage of the building.

"Other tower blocks that are not connected to the Orchid Heights development are being built on the perimeter of our site," he says. "This restricted us in the placing of one of the smaller cranes and has meant a close overlap with the Liebherr, but we worked with Liebherr engineers to devise the optimum configuration.

"The Liebherr crane will climb with the building, all the way to the top, and so any restrictions caused by the overfly will very quickly disappear."

The 200 EC-H 10 has been supplied new to Man Infra from Germany, specifically for this project, via the Liebherr India office in Mumbai. Maximum lifting capacity is 10t, and at the end of the boom, the crane can lift 2.4t.

Mr. David Griffin, representative director of sales and service for Liebherr tower cranes in India, mentioned the close cooperation and interaction which was involved in this project. "We meet the Man Infra people on a continuous basis to discuss all their project requirements and are working hard on a continued close partnership for many projects Man Infra is executing here. We are more proud to see the many Liebherr tower cranes being installed on the skylines of Indian cities. The association with Man Infra in Mumbai is a great flagship for us."

Mumbai, India’s largest city is undergoing an unprecedented building boom, and now that height restrictions have been relaxed many of the structures currently being built are in the ‘super tall’ category.

At present, the tallest building in Mumbai and in India is Imperial Towers, at 249m and 60 storeys. This will be superseded in 2012 with the completion of the 320-m Palais Royale project, and Orchid Heights when completed will be second only to this in height.

Though the floor space index (FSI), the permissible construction on a plot of land, is capped at 1.33 in Mumbai as compared to 6-9 in Hong Kong and Singapore, an FSI of up to four is permitted in redevelopment projects. So, developers are attracted to build up to four square feet on every square foot of land on which a textile mill, an old building or a slum once existed.

Orchid Heights is being built on a total plot area of 6 acres in the Mahalaxmi district of Mumbai once occupied by factory buildings.

Man Infra is a leading Mumbai-based construction company with an established record of working with real estate developers on residential projects, and is undertaking the Orchid Heights development for DB Realty.