Visakhapatnam Port in India, is being expanded and modernized over a period of two and a half years. The contractor, ITD Cementation India Limited, used a Liebherr duty cycle crawler crane type HS 8100 HD equipped with a mechanical slurry wall grab for the purpose. 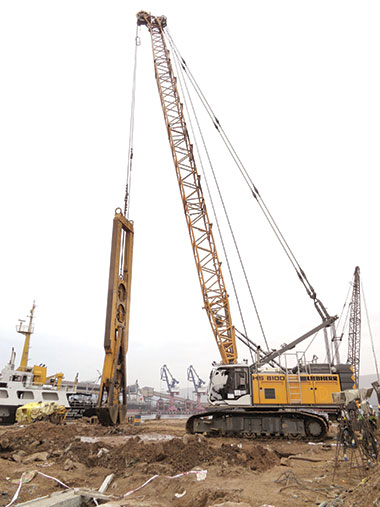 Visakhapatnam Port is one of 13 major ports in India and is the only major port in Andhra Pradesh. It was built in 1930 and has three harbours – the outer harbour, the inner harbour and the fishing harbour. A modernization and expansion program aimed at increasing the port’s capacity is currently underway. As part of the modernization program ITD Cementation India Limited has been awarded the contract for the development and construction of a multipurpose terminal, which entails replacing the existing East Quay berth 2 to East Quay berth 5, as well as dredging and dismantling work in order to cater for vessels with 14-metre drafts in the inner harbour of Visakhapatnam Port Trust.

A contract period of 30 months is planned for the construction of the jetty, which is 522.7 metres long. The work commenced in March 2016 and includes 134 T-panel retaining slurry walls. These measure 4000 x 3000 x 800 mm each and are between 30 and 36 metres deep, including 1 metre of rock socketing. The soil consists mainly of sand, clay and silt before a layer of high strength rock (>120 MPa) is reached. ITD Cementations commissioned the brand new Liebherr HS 8100 HD (100 t) heavy duty cycle crawler crane for the job together with locally sourced heavy duty mechanical slurry wall grabs of 2.2 meters and 4.4 meters length respectively. Furthermore, a chisel weighing 13.4 t for penetrating the hard rock is also being deployed.

The HS 8100 HD is equipped with two powerful 27.5-tonne winches that operate the heavy duty mechanical grabs of 18 t and 23.4 t with rope speeds of up to 96 metres per minute, making it ideal for fast cycle operation. The grabs handle up to 170 m³ of material per T-panel. With line pull of 27.5 t, the duty cycle crawler crane achieves 17 drops per minute with the chisel at a height of 1.5 to 2 m in order to break the rock to the required level. Compared to the previous solution with a mechanical crane, the Liebherr duty cycle crawler crane has improved productivity by as much as 70%. The machine is powered by a Liebherr D 946 A7, 390 kW engine, which provides the thrust for the crane to perform multiple functions with ease at a consumption rate of 14.5 litres per hour. The machine has clocked up 3,200 hours in 9 months – 2,500 hours of which have been consumed only for chiselling.

The ITD Cementation team are highly impressed with the machine as it has reduced their project duration considerably and will achieve handover before the set deadline. This is the first ever heavy duty cycle crawler crane in ITD’s fleet. This outstanding performance combined with the excellent service provided by Liebherr India’s team lays the foundation for a close cooperation and we look forward to more HS machines being considered for future projects in India. “The HS 8100 HD has proven to be a real work horse since its induction. The erection of T-panel slurry walls as well as chiselling is carried out singlehandedly, which drastically reduces the total operational time and improves efficiency.” – Arup Deb, P&M Head, ITD Cementation India Limited.