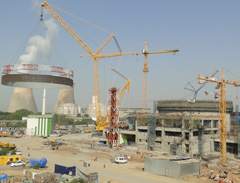 A Liebherr crawler crane LR 11350 erected a complete pre-formed ring linger during the construction of reactor block 3 at the Kakrapar Nuclear Power Plant in Gujarat, a unit owned by Nuclear Power Corporation of India Ltd (NPCIL), for nuclear energy and nuclear power plants in India.

With a diameter of around 50 m, a height of 5 m and a total weight of approx. 170 t including the weight of the ring, the spider-type lifting tackle fitted with evener beam, the ring was probably the dimensionally largest single structure ever to have been hoisted by a crane in India.

Initial plans called for the 16 ring segments to be hoisted individually on to the inner containment structure at a height of 50 m where they would be assembled and welded. This pro-cedure is complicated and becomes even more difficult as the height increases. Since a Liebherr LR 11350 was already in use on the site, NPCIL decided to change its plans. As a result of the LR 11350's enormous load capacity and extremely sensitive control, the erection plans changed,the ring was assembled on the ground and then simply lifted into position with a single hoist. This procedure meant that the quality of welding was improved which in turn enhanced the safety of the power plant and also saved a good deal of material and time.

The Liebherr crawler crane has a maximum load capacity of 1,350 tonnes and was fitted with an S main boom, a luffing jib, derrick system and a ballast trailer. The heaviest load moved by the LR 11350 on the site was the generator which weighed 400 tonnes at a radius of 44 m. Lifting it through the openings whilst maintaining a safe distance from the surrounding walls was particularly challenging.