One of India's largest civil engineering contractors, Larsen & Toubro, has been using a Liebherr 200 EC-H 10 Litronic tower crane to construct the new terminal building at Mumbai international and domestic airport.

A Liebherr 200 EC-H 10 Litronic tower crane has been used by Larsen & Toubro on the construction of the new terminal at Mumbai's Chhatrapati Shivaji International Airport (CSIA).

The contractor, who is one of India's largest, selected this model because of the ease and speed with which it can be set up on this highly congested site, and because its working specifications allow it to operate effectively within very tight parameters.

The 200 EC-H 10 was supplied new by Liebherr India Pvt Ltd, which is headquartered in Mumbai. 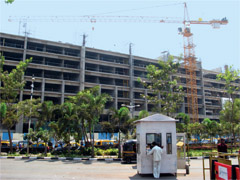 CSIA is India's largest airport and is spread over an area of 7.6 km2 in the north of the city. It handles 26 million passengers a year, 400,000 t of cargo and has about 500 landings and takeoffs daily.

India is currently upgrading its main airports to satisfy international standards and provide world-class facilities for business and the tourist industry.

The Indian government has decided that CSIA should be modernised and operated under a joint venture lease arrangement between the Airports Authority of India (AAI) and a private consortium, who would provide the majority of the funding in return for an operating concession of 30 years under a Build Own Operate Transfer (BOOT) arrangement.

The main aim is to produce an airport that can handle a passenger volume of 40 million a year and also cargo traffic of over one million tons and this means the construction of a new common integrated terminal for domestic and international passengers and refurbishment of the older domestic terminal for cargo use.

The new terminal has been designed by Skidmore, Owings and Merrill and is being constructed by Mumbai-based Larsen & Toubro (L&T) under a $1.4 billion contract awarded by MIAL.

The contract includes modernisation and expansion of the existing airside facilities such as construction of taxiways, aprons, aircraft maintenance, and primary infrastructure support facilities, while landside facilities include the new terminal, a new multi-storey car park and access roads up to the terminal.

The terminal building is a four-storey structure 45m in height and will have a total property area of almost five million square feet. For L&T, the task of dismantling the existing international terminal and constructing a brand new one without disturbing existing passengers and aircraft traffic is an enormously complex one.

"We used just the one tower crane on the terminal building," says L&T's technical manager Vihang Khopkar. "Therefore, we needed crane specifications that would allow us both reach and lifting strength in this very restricted area in which we are working.

"Other factors in making our choice were ease and speed of crane erection and dismantling, because the enormous volume of passengers and road traffic in this immediate area means that any holdups at all would cause severe disruption. 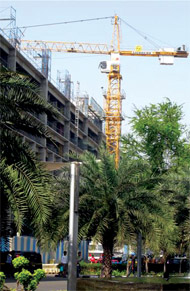 "L&T is very familiar with Liebherr, and this particular model matched our needs perfectly."

Rep. Director of Sales & Service for Liebherr Tower cranes in India, Mr. David Griffin added that L&T has concluded orders with Liebherr for around 11 new tower cranes in the last 12 months.

"We will keep working in close cooperation with L&T for their tower cranes requirements and will supply several brand new cranes to some of their most prestigious projects such as Minerva Tower (Mumbai), Delhi One (Delhi), Lodha Fiorenza (Mumbai), Oberoi Exquisite (Mumbai). Some of the cranes will work at end hook heights over 300m. We are very proud of the close association with L&T."

The cranes in Liebherr's EC-H series are powerful enough for medium to large construction projects, and are designed to a modular concept for ease of erection.

The 200 EC-H 10 Litronic at Mumbai is a standard model with a maximum hook height of 68m and maximum lift capacity of 10t. The boom has a length of 60m and can handle loads of 2.65t at full length.

The upgrading of CSIA, the building of a new control tower under a separate contract, and the construction of a new road and feeder system for the airport, is the largest single construction project ever undertaken in Mumbai with an estimated workforce of 15,000 on the various elements. Completion of the entire project is scheduled for 2014.