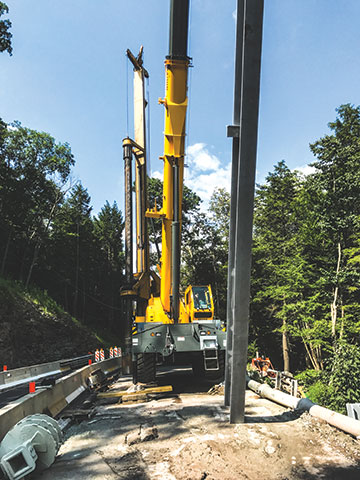 Kriger Construction (Kriger) has been using one of Manitowoc Cranes' latest rough-terrain models, the Grove GRT8100, for more than six months in its bridge-building operations. The Scranton, Pennsylvania-based company has found the new 100 USt crane to be a beneficial addition to its fleet, thanks to the competitive capacity, build quality and smooth operation that the GRT8100 offers.

"Compared to traditional rough-terrain cranes I've used, the GRT8100 operates a lot more smoothly," said Joe Palickar, general superintendent for Kriger. "I was able to notice it even on a 10% roadway pitch with the outriggers deployed at 50%. From the movement of the boom to the stability of the house and tilting cab, you can feel how well-built this crane is."

When Kriger received its GRT8100 in June of 2017, the company immediately put the crane to work on a new bridge project, setting 3.5 USt barriers in a river to build a cofferdam. After completing the task, the crane installed 32 ft-long beams that weighed 6 USt each, all within a tight, 18 ft-wide work space. Operators then used the GRT8100 to lift 18.5 USt precast segments to build the bridge itself. It was the first of five projects on which the company used the GRT8100 in 2017, and according to Kriger, all five of them went well.

In 2018, the company is scheduled to build more than 30 bridges, and the GRT8100 will be used on all of them. According to Jason Wilson, crane operator for Kriger, the GRT8100 is especially well-suited to bridge-building applications.

"The GRT8100 is great for precise work that requires lifting accuracy, such as building precast bridge components," he said. "When I have to hit a 1/8-inch gap with an 18 USt deck slab, this crane makes it easy."

That precision is made possible by Manitowoc's Crane Control System (CCS), which comes as standard on the GRT8100. The intuitive user interface has an operator-adjustable controller setting and full proportionality to assist with the precise setting of loads in any critical application, as well as many other customer-focused improvements.

"I've been spoiled by the new CCS," Palickar explained. "Everything I need to scroll through the menu is conveniently located on the arm rest, right at my fingertips. Not only do I have the option to deploy outriggers to 50%, but the deployment process is easy with CCS. I also like being able to see the percentage of the boom that's extended."

In addition to CCS, the GRT8100 has several other features that were designed with today's construction market in mind, including a 154 ft, five-section main boom that provides better reach and greater versatility. The rough-terrain crane also has a tilting cab, impressive load charts and the benefit of extensive component testing at Manitowoc's Product Verification Center (PVC) to ensure quality and reliability.

Kriger's GRT8100 was provided by Stephenson Equipment, which has been offering sales and rentals of construction equipment, paving machinery and cranes since 1957. The Harrisburg, Pennsylvania-based company serves customers from six locations across its home state and New York. Stephenson is an official dealer of Manitowoc, Grove, National Crane and Potain cranes.

Kriger Construction was founded in 1978 by Alfred Kriger and has served northeastern Pennsylvania as a family-owned company ever since. Based in Scranton, the construction firm specializes in heavy highway and utility work, and is currently run by president Linda Malinowski and vice president Jim Marzolino.