Mumbai-based rental company, The Bhoir Group, has taken delivery of its fourth Liebherr LR1300 crawler crane in less than 18 months. Two units including one delivered at the end of 2012, are working on the Koradi Thermal Power Station 3 x 660 MW expansion project close to Nagpur in Maharashtra. 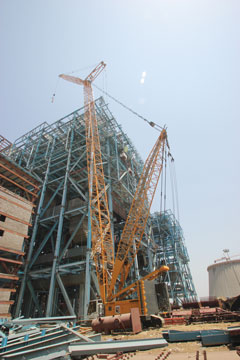 Located in Koradi, near Nagpur, Maharashtra, it is one of four major power stations in the region and supplies a total current capacity of 1080 MW with seven coal-fired boilers installed between 1974 - 1983.

The decision was taken by the Maharashtra State Electricity Board to ensure additional capacity to meet its own purposes and spare capacity for the national grid with an expansion programme comprising three 660 MW coal-fired steam boilers.

Erection work on the expansion project started in May 2011 and is scheduled for on-line completion by the end of 2014; with the first boiler being commissioned at the end of 2013.

Larsen & Toubro Power was appointed as the Engineering, Procurement & Construction (EPC) contractor for the project with the L & T MHI (Mitsubishi Heavy Industry) JV supplying the boilers and the L & T -TPPC JV appointed as the Thermal Power Plant Contractor.

With more than 11,000t of steel in each 90m high, 6-storey structure, both LR1300's have been 'busy' lifting steel beams and columns throughout each 12 hour day shift.

'Generally', says Bhoir's crane operator Mr. Praveen 'including holding time, the cranes are working a minimum of between 8 - 9 hours daily'.

The LR1300 has been designed for a wide range of applications offering a high degree of mobility with superior load charts in most configurations. It is also easy and fast to erect and incorporates 'state-of-the- art' electronic componentry.

One of the two LR1300's on the extension project has been configured for use with both the main boom, luffing jib and derrick allowing it to reach the upper levels lifting a total of eight beams weighing 52 t and 15 m long - on all three structures; a task taking up to 3 hours including lifting, bolt-up and tightening.

According to Mr. P. S. Rao, Head-Plant and Machinery, L & T, both Liebherrs are able to meet the contractor's demands with ease, even when compared with a larger on site 350 t capacity crawler crane.

"The Liebherrs have a superior main boom length and luffing jib offering a better boom combination with high reach", he said adding, "The Liebherr main boom is 98m compared with the 84 m maximum offered with the 350 t unit. Plus with the 65m luffing jib available on site, the LR1300 is easily outlifting the contractors 350 t crane's on the job site; with its magnificent boom combinations".

For the second LR1300 on site Bhoir's opted not to install the derrick jib for ease and speed of assembly plus said, Mr. P. S. Rao, 'it was not necessary to fit the derrick jib for lifts on the lower levels of the structures but we have it on-site if it is needed to lift above 74 m.'

In addition to the steel framework for the three boilers, the Liebherr cranes are also being used to erect three coal bunkers, each 9.8 m diameter and comprising nine steel rings per bunker and each weighing between 9 - 10 t.