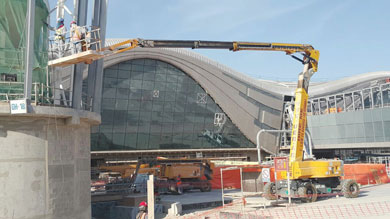 "It's all because of our excellent Service to the end users that sustained Haulotte machines for more than 18 months in this project of course with the Support of Haulotte" according to one of UGER's representatives. "70 units of various Haulotte models are working on site, this project is expected to complete by end of 2017 and we are confident of not only maintaining our existing Haulotte fleet but also with great possibility adding new units with better quality of service by deputing more technicians on site 24/7 with spare parts equipped. Thus giving clients / contractors a better advantage and an additional edge over Haulotte & UGER".

The construction of MTC and Expansion of Abu Dhabi International Airport are vital to enable the diversification of the Emirate's economy by continued growth support to other industries through increased connectivity. 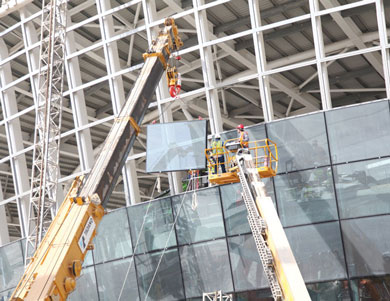 Abu Dhabi Airports Company (ADAC) with joint venture of TAV, CCC, and Arabtec have signed AED 10.8 billion contract on 27 June 2012 for the construction of the Midfield Terminal building (MTB) at Abu Dhabi International Airport with opening planned in 2017, while United Gulf Equipment has joined the project in 2014 catering a significant number of Haulotte Aerial Work Platforms which mostly comprises big booms.

Haulotte products are designed to reach the most difficult working areas, thanks to the best working envelope that was utilized accurately to build the complex shape of the building and modern high tech elevation finishing.

Majority of Haulotte models working in MTC are Haulotte Articulated Boom 32m, 41m & Telescopic Boom 43m. 41m has a maximum outreach of 19.80m and the best lifting speed with less than 40 seconds which reduces time and increases productivity whereas 32 meter Articulated Boom & 43m Telescopic Booms are well-known for their Rough Terrain capabilities.