In early June, the Spanish tower crane manufacturer Linden Comansa temporarily left aside its characteristic blue corporate color. In Moscow's CTT tradeshow, Russia's most important fair, Linden Comansa exhibited a golden 16LC185 tower crane, which not only noted for its extravagant color, but for its advantages and innovations.

Included in the LC1600 Series, the 16LC185 brings together Linden Comansa's main advantages: it has Flat-Top design without pendant lines, it is easy to transport thanks to its paneled tower sections and its compact design, and it is quickly and easily erected due to its lightweight components and its assembly system with pins. Also this crane features the Effi-Plus high speed hoist mechanisms, the PowerLift system, which improves the load diagram by 10% at reduced speeds, and includes frequency variation in the slewing movement, which decreases potential maintenance problems.

The exhibited crane at Moscow's Crocus Expo Centre was the medium version of 16LC185, with maximum load capacity of 10 tons, although this same crane is available in versions of 8 and 12 tons. Bashkransnab, official distributor of Linden Comansa in Russia and co-exhibitor at the fair, has sold the crane to a local construction company, who will soon install the crane in a jobsite in the center of Moscow, where it already has several Linden Comansa cranes. Also, many other offers have been done during the show, which Bashkransnab and Linden Comansa expect to be confirmed very soon. 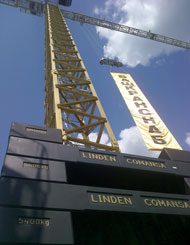 In addition to the interest for the cranes from the LC1600 Series, many visitors have also asked about the cranes from the LC1100 series (with maximum load capacities from 5 to 8 tons) which are highly popular in Russian market, and from the LC2100 Series (between 12 and 48t). Most of the visits have been top constructors and machinery rental companies from the Russian Federation, and also from former Soviet republics with which Russia maintains close economic relationships, such as Kazakhstan, Belarus, Azerbaijan or Ukraine.

Martin Echevarria and Greg Teyf, Linden Comansa's Sales Director and Area Manager for Russia respectively, moved to Moscow on the occasion of the fair, where they worked with a large sales and technical team from Bashkransnab. Both companies have been very satisfied of their second collaboration in the CTT fair (they exhibited together in 2012), which has not only given good results in the short-term with the sales, but that has also served as starting point for future joint plans.