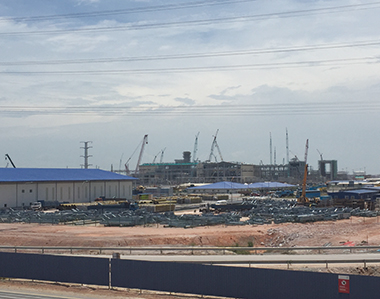 Pengerang Integrated Complex (PIC) project was launched in May 2012
Genie’s 85 units of Mobile Elevating Work Platforms (MEWPs) are currently working on one of the biggest integrated developments in the refinery and petrochemical industry in Pengerang, Southern Johor, Malaysia. It is estimated that the requirement for MEWP would increase to 800 units as the project progresses.

Petroliam Nasional Berhad (Petronas), launched the Pengerang Integrated Complex (PIC) project in May 2012, with a total investment of approximately US$27bn. The complex will span 2,000 ha and will produce nine million tonnes of petroleum products and 4.5 million tonnes of petrochemicals a year. The complex as a whole, is expected to produce 7.7 million tonnes per annum (Mtpa) of differentiated and speciality chemicals such as synthetic rubbers and high-grade polymers. The PIPC will help Petronas to meet the increasing demands for petrochemicals in the Asia Pacific region for the next 20 years. It is set to transform Southern Johor into a new petrochemical hub and spur economic growth in the region.

They are deployed in all works at heights such as the construction of steel fabrication of refineries and in welding and paintings. Genie lived up to its reputation as a robust machine. With its 4-wheel drive, it is able to deal with the ruggedness of the terrain and, at the same time, operate over long hours. Eight service technicians are stationed at the jobsite at all times to keep the Genie machines operational. Its ability to control positioning and precise movements of its booms make it an ideal choice for this project.

The PIC development has been projected to take upto 12 years to complete. Genie looks forward to supporting its development till the end.