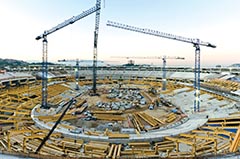 If there was a poll about the world’s most famous sport venue among football (soccer) fans, or even among general sports fans, very few would name the “Jornalista Mário Filho” stadium. But on the first place of the list would be without any doubt “Maracaná”, the name with which this stadium at Rio-de-Janeiro, Brazil, is popularly known.

The project belongs to EMOP – Empresa de Obras Públicas do Estado do Rio-de-Janeiro – and Secretary of Works, and is executed by “Consórcio Maracanã Rio 2014”. This consortium, formed by construction companies Odebrecht Infraestrutura and Andrade Gutierrez, relies on four 21 LC 400 tower cranes from Spanish manufacturer Linden Comansa. The cranes, with maximum load capacity of 18 tonnes, have been erected with jib length of 70 meters, which allows them to reach the entire jobsite. Their most important task up to now is mounting the metal structures of the tiers of seats, although soon they will be helping on the assembly of the steel cables of the ceiling, which will cover 96% of all seats.

The four tower cranes are part of the fleet of rental Roll-Lift Latin America, formed after the acquisition of Rino Movimento de Cargas by Dutch company Roll-Lift. Nowadays Roll-Lift Latin America has more than 130 employees in Brazil and Uruguay, where it provides services to projects where cargo handling and heavy transport are necessary.

The new “Maracaná” stadium, which will have capacity for almost 79,000 spectators, should be finished by February 2013, four months before hosting its first competition, the FIFA Confederations Cup.