First Manitowoc 16000 Wind Attachment in India Gets to Work

The first Manitowoc 16000 with wind attachment in India is currently working on one of the country's largest wind farms. As well as being the first crane of its kind in India, the Manitowoc 16000 is also the largest new crawler crane ever purchased by owner Amrik Singh & Sons Crane Services Pvt Ltd.

Gurvinder Singh, director at Amrik Singh, explained the motivation behind the latest purchase.

"We're heavily involved in wind turbine work, and we've found even used cranes built five years ago don't have the capabilities we need to assemble current and future generations of wind turbines," he said. "We looked at a variety of cranes that can do the type of wind power work we need, but we liked the 16000 with wind attachment best. It has excellent lifting abilities for the kinds of projects we're involved with, and for its size, it's easy to move and assemble."

Amrik Singh purchased the crane through TIL Limited, Manitowoc's crawler and mobile crane dealer for India. The crane was developed in mid-2011 and has since been working on the huge Jasdan 100 MW project in Jasdan near Rajkot, Gujarat.

There are more than 50 turbines of 2.1 MW capacity to place on the project, each taking between two and three days to assemble at each location. With so many turbines on the project, the company recognizes Manitowoc's FACT connection technology as a key feature in helping rig the 16000 faster.

Gurvinder Singh said there was more to consider with the 16000 than just its lift ability. 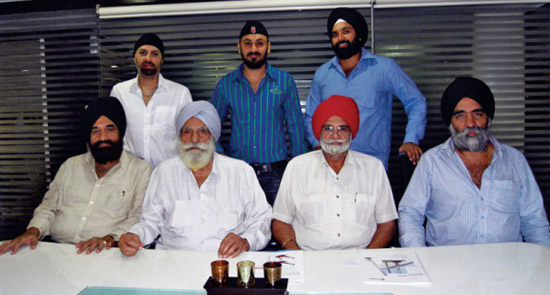 "When we first spoke with TIL about the 16000, we did considerable research on what we needed from a crane," he said. "Even though the 16000 had more capacity than we were looking for, we decided it was a worthwhile investment and we can secure jobs for it for the next four to five years.

Wind turbines in India are getting larger and with the 16000 we have the perfect crane to assemble them."

The company is familiar with Manitowoc cranes, as it currently has 20 Krupp all-terrain cranes (a brand acquired by Grove in 1995), including a 550 t capacity Krupp 500 GMT. But the 400 t capacity 16000 is its largest new crawler crane, and also its first Manitowoc.

Prior to receiving the Manitowoc 16000, Amrik Singh used a combination of cranes for wind turbine projects, including the 550 t Krupp mobile crane, plus some smaller cranes around 250 t capacity and larger lattice boom mobile cranes of up to 800 t. It was using between three and four of these to erect wind turbines of up to 2.1 MW capacity.

Now, the 16000 can erect these turbines on its own and has the capability to install larger turbines. Amrik Singh has worked on wind power projects in India since 1993 when it took on its first project for Vestas. That first job was the installation of a 250 kva turbine with a 30 m tower and a nacelle weighing 9 t. On the Jasdan 100 MW project the 16000 is lifting 85 t nacelles on to towers of up to 80 m.

And it's not only wind power projects that will benefit from the 16000. Gurvinder Singh sees numerous other opportunities for the crane.

"Over the next 20 years in India, there's going to be a lot of work on projects like bridges, infrastructure, power plants and cement plants," he said. "We will need to make much bigger lifts, so large-capacity cranes like the 16000 will be busy."

Amrik Singh & Sons was formed in 1975, although the company's founder, Amrik Singh, established a trucking company many years before that. There are currently three generations working in the family business – three sons and three grandsons of Amrik Singh. The headquarter is in Mumbai and the company runs 75 cranes in its fleet.