The all-new MCT 85 was erected onsite in January 2015, a month after the order was placed at bC India, where the crane was launched into the India market in December 2014. It will remain onsite until January 2017, working up to 22 hours a day, lifting concrete, shuttering materials, blocks and structural steel. To date, the MCT 85 has performed perfectly with no downtime reported by the contractor.

"We want to have a good night's sleep, so we bought a Potain crane. The location of the crane is quite remote and for this reason reliability was a key consideration. This is why we invested in a premium crane like the MCT 85," said Raj Ranjan Moharana, managing director of Everest Construction Equipment. 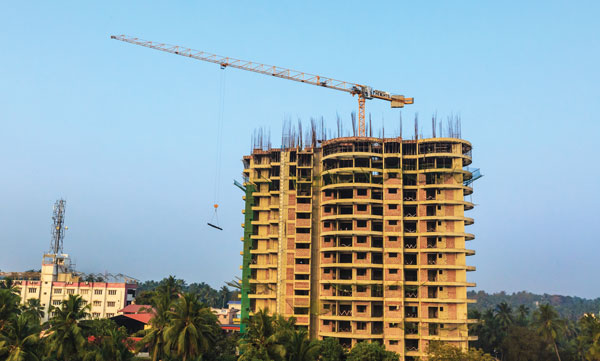 Established in 2010 as a crane erection and dismantling company, Everest Construction Equipment entered into the crane rental business in 2012 following strong market demand from its clients. The company's first purchase in December 2012 was a pre-owned Potain MCi 85. Further investments followed, in June and September 2014, with the purchase of one new and one pre-owned MCi 85. One of the company's MCi 85 units spent last year working on a 4-story building in the religious town of Dhamasthala in Karnataka, where it helped build a new marriage hall. At present, most of the company's clients are contractors working on retail projects or developers who had landed big projects.

"When I started in the crane business, my first crane was a Potain crane so I was very familiar with this brand. I also trust the brand and know all the people from Manitowoc Crane Care. I felt we are one family and felt very close to Manitowoc," added Ranjan.

The state-of-the-art Potain MCT 85 purchased by Everest Construction Equipment was manufactured in Manitowoc's Potain factory in Pune, India, with its proximity enabling shorter delivery times to India-based customers. This new flat top crane is equipped with a 5 t maximum capacity and an ability to lift 1.1 t at its jib end of 52m. For Everest Construction Equipment, the 52m boom was a particular attraction.

The MCT 85 can be operated as an internal climbing crane, positioned inside the building it is constructing. Mounted on its 1.2m mast sections, the crane can offer a maximum free-standing height of 33.2m when operating internally.

With accessibility cited as one of the key issues faced at India's construction sites, the MCT 85 is also easy to transport. The crane's entire top portion transports on just two trucks. Thanks to pre-assembly work performed at the factory, on-site assembly is simplified too. For example, the counterjib and towerhead are fitted together as a single unit and can be lifted as such. Connecting the jib is simplified through the use of rapid pin connectors. This enables the tower crane's entire upperworks to be connected in just two sections.

Ashwani Mattoo, sales director for tower cranes at Manitowoc Cranes, said, "The work for the MCT 85 in Karnataka highlighted the machine's strengths. The first job of this machine demonstrates perfectly the crane's class-leading capabilities."

He said, "Crane owners want machines that are fast to transport and assemble, so they can spend more time working and less time setting up. The new MCT 85 is quick to be set-up, flexible on-site and productive in the air. It really does represent the future of tower cranes in India."

At present, Everest Construction Equipment is a team of 12 people and the company has the capability to supply and erect three cranes per month. The company is presently investigating further additions to its fleet as it looks to grow its business.