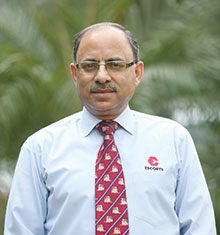 Metro rail projects are a major growth driver for ECE, whose Pick & Carry cranes have been the first choice for material handling jobs at various Metro Rail construction sites across the country. Seeing the demand from this segment, the company will be launching some new models with higher capacity and improved lifting soon, reveals Mr. Rajinder Raina, GM-Marketing, Escorts Construction Equipments (ECE)

The first Metro Rail, the London underground opened in the year 1863, and the electrified version started in 1890. In India, the first Metro started in Kolkata in 1894. This was followed by the Delhi Metro Rail System (DMRC), which remained at the planning stage for a pretty long time, till work finally started in October 1998. The first stretch was inaugurated on 24 December 2002 by the then Prime Minister Mr. Atal Bihari Vajpayee. Ever since, DMRC has moved into Noida, Gurgaon and Faridabad covering approx. 218 kms with 164 stations. It comprises, underground, at-grade and elevated stretches/stations.

The project gave the confidence and spirit of “we can do it” to the many stakeholders. Metro Rail projects have gathered traction with Bangalore, Mumbai, Jaipur, Chennai and Kochi metros getting operational. In Hyderabad, Ahmedabad, Lucknow, Nagpur, Greater Noida, and other cities, the metro projects are in various stages of completion, while technical and financial closures have been achieved in many more cities/projects.

Pick & Carry cranes were a default choice for various material handling jobs along the lines at stations and at pre-casting sites. As the work gathered speed, DMRC started working against time for meeting the deadlines. During the execution, there was an unfortunate accident at one of the sites, which resulted in a review of the Safety Measures at several sites.

Escorts worked towards making its pick & carry cranes extra safe. For instance, its most successful Escorts F-15 crane was made extra safe by incorporating some design changes and adding more safety features. When there was a demand for higher safe load handling height, Escorts came up with its TRX 2319, a 23-ton crane with a maximum boom height of 22-m with fly jib, and features such as an Auto Levelling hook block, Safe Load Indicator, Rear View Camera, and Equipment Monitoring System. Both Escorts F-17 & Escorts F-20 have been deployed for various material handling jobs.


Escorts’ TRX and F-Series of cranes are the first choice for building and maintaining Metro Rail projects, but the crane to watch out for is going to be Escorts CT Smart 15, a high Max & Low Creep speed crane with 40% grade-ability 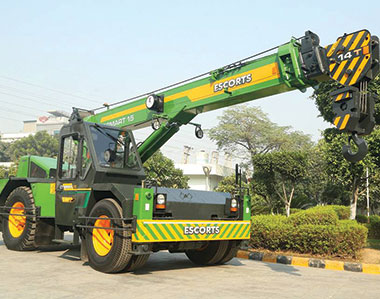 But the crane to watch out for in Metro Rail projects is going to be Escorts CT Smart 15, a high Max & Low Creep speed crane with 40% grade-ability. With a wheel base of 3.5-m, it has a turning radius of 6-m, making it a compact solution, especially in smart tier II and III cities. It is the only crane with a lifting capacity of 14T at snatch block with a 3-part hydraulically powered and fully synchronised boom. Compact yet stable, it is going to be a star crane of the future.

In fact, with a keen eye on the application requirements at different metro sites, Escorts has lined up some new crane models this year. These cranes will have higher capacity and an improved lifting load profile.

For the next few years, Metro rail projects will be a major demand/growth driver for Escorts, given the company’s expertise and current leadership in this segment. Customisation of the cranes with unique features, options and special purpose attachments, is an ongoing process at Escorts. The company is also working towards sustaining its leading position through new product offerings, along with improvements in its existing range.