Escorts’ Journey from 'Hydras' to 'TRXs' 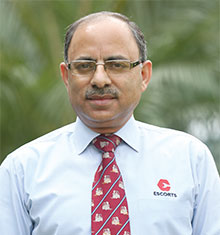 Mr. Rajinder Raina, General Manager-Marketing, Escorts Construction Equipments (ECE), sheds light on the journey of Pick-n-Carry crane from Hydra to TRXs and advancements being made in the material handling range with technology transfer and R&D.

Mechanized material handling in India owes its origin to the Pick-n-Carry crane of Escorts called Hydra. This simple/basic technology crane had a Tractor back end and served the market singlehandedly for decades. Escorts kept on adding higher capacity models from time to time. These Hydra cranes offered a bigger and better load profile as in load moment with higher lifting capacity and increased reach.

In 1998, Escorts joined hands with Faranna of Australia for technology transfer to develop a technically advanced crane, wherein the tractor backend was done away with to create a much more stable platform that offered scope for a total transformation in Pick-n-carry cranes. The first in this series was called Escorts K10 crane. It had a cabin in the front giving the operator clear visibility of the load & ease of driving on the roads. An articulation at almost half way along the X-axis, higher ground clearance, & lower turning radius changed the entire performance. The drive line comprised commercial vehicle aggregates giving faster speeds, and the platform supporting the boom to give a better load carrying geometry over the entire profile. This defined a paradigm shift in the Pick-n-carry cranes in the material handling landscape of India.

Escorts K10 underwent a host of iterations to ensure that it got aligned to the demand from the site/application, user & operator. In early 2002-03, we launched Escorts F15.It just fit the bill in a universal manner. The acceptance at major projects like Jamnagar Refinery to the retail hirer across the road, made it a huge success and it remains one of the best sellers in its category even today. 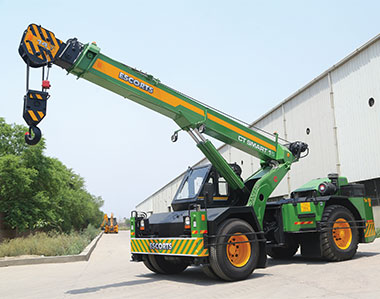 Powered by 101 hp at 2400 rpm VOLVO - EICHER engine which is coupled with synchro-mesh transmission and AGB with high/low and 2WD/ 4WD mode selector. 10 forward and 2 reverse speeds has high torque of 368 Nm at 1400 rpm. These specifications meant a complete upgradation of the conventional Hydra. Thereafter, Escorts kept on launching cranes in this genre at regular intervals. These cranes were named TRX-Series. The highest in the series is TRX 2319 with a maximum lifting capacity of 23 ton and a maximum reach of 19 meters. TRX 1250, TRX 1651 are other cranes of the family. The great success of F-15 led to the launch of F-20 and F-17 cranes. These cranes have 4 part slotted boom with 3 parts hydraulically powered and fully synchronized. It has best in class luffing range from - 10⁰ to + 65⁰ for versatile craning operations.

These cranes are rated at 75% working capacity with 25% margin of safety. High travel speeds and very low creep speeds make them versatile for side to side travel and better load carrying capacity. The cranes have various inbuilt safety mechanisms which make them universally acceptable for all types of jobs/applications.

There are multiple attachments available as optional. The latest addition in TRX Series is the Escorts CT SMART 15 crane. It is the most compact crane in its class, designed for the prestigious smart cities initiatives by the current Modi government. With the market looking up, the next couple of years are going to be good for our cranes, in particular.