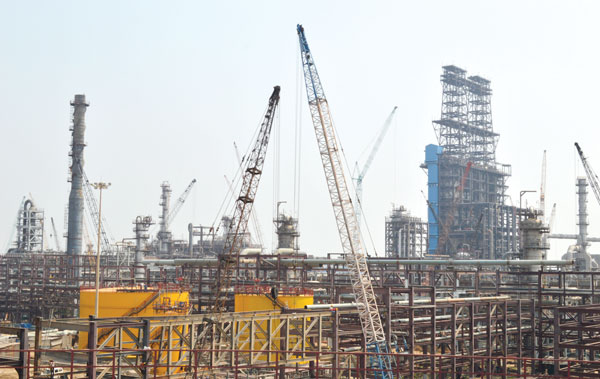 Proposed hydrocarbon based energy projects along with planned revamp of existing ones are likely to spur demand of light and medium capacity cranes in the North Eastern region of the country in the long run. P.P. Basistha takes a look.

The government's ambitious 'Hydro Carbon Vision 2030', which proposes to develop hydro carbon based industries in the North East, could come a shot in the arm for crane manufacturers and rental agencies. The objective of this vision plan is to leverage the region's hydrocarbon potential, enhance access to clean fuels, and improve availability of petroleum products.

The states to be covered for harnessing the hydrocarbon potential of the region includes, Arunachal Pradesh, Assam, Manipur, Meghalaya, Mizoram, Nagaland, Sikkim, and Tripura. For developing the projects, the stress is on greater involvement of respective state governments towards planning and implementation of the same and on boosting trade with the neighboring nations.

On projects, the 'Vision' emphasizes, creation of a detailed hydrocarbon value chain. This includes, building refineries, creating pipeline connectivity for carrying Liquefied Petroleum Gas (LPG) natural gas, petroleum products, oil and lubricants. It also emphasizes towards creation of infrastructure to build import links, development of Compressed Natural Gas (CNG) network. Beyond creation of production infrastructure, the 'Vision' focuses towards developing of hydrocarbon linkages and trade opportunities in Bangladesh, Myanmar, Nepal, and Bhutan. The development of linkages is based on the idea of government's 'Make in India' programme.

Given that the projects will be coming up on undulated, steep gradients and slushy terrain of the region, demand for the cranes could be of rough terrain and crawlers in their origin. Demand of cranes with RT features could be both for building the refineries and laying the pipelines within and outside the battery limits and also for building up the pipeline network based on the evacuation design plan for the finished products.

The volumes of the cranes could be in good numbers. However, they are likely to be in the lighter and medium range. This is based on the fact that the proposed projects will be of smaller and medium capacities, sharp in contrast to their other mega counterparts of IOCL's newly commissioned, 15 mmtpa Paradip refinery in Odisha.

The demand for cranes in the North Eastern market has been traditionally less volume driven. This is due to the moderate size of the market based on moderate number of projects. However, the off-take has always remained stable. New cranes have been acquired on regular intervals by ONGC, IOCL, and Oil India Limited besides state owned oil companies for undertaking regular maintenance of their onshore assets. The demand is likely to go up based on the planned expansion of these companies and to improve the yields of the refineries. IOCL owned Bongaigaon refinery has very recently purchased a one-100 ton mobile crane for its captive maintenance jobs.

The demand of cranes is likely to go up further from Bongaigaon refinery. IOCL will set up an Indmax FCC Unit (incl. LPG Treatment) of 0.740 MMTPA with an investment of Rs. 2582 crores at its Bongaigaon Refinery increasing the process complexity of the refinery based on Indmax technology.

Additional demand of cranes is likely to come up with the planned revamping and installation of new units by the refineries by setting up additional number of trains. As per the recent Government guidelines, BS-VI quality fuel norms are to be implemented in the entire country from 1st April, 2020. To this end, various revamps and installation of new units are envisaged at Haldia, Digboi, and Bongaigaon refineries in the Eastern and North-Eastern part of the country. In Guwahati, BS-VI Motor Spirit compliance will be achieved with the commissioning of INDA dept-G & Catalyst replacement of HDT unit. Paradip Refinery is engineering enabled, based on its trains to supply BS-VI grade HSD.

The cranes, required for new applications to facilitate the refinery expansions, will have to be engineering wise better application oriented. This is based on the fact that the expansions and upgradations will take place in existing refineries with less space within the battery limits. This may require the cranes to be compact for easy maneuverability while moving with the loads and erection. There could be requirements of added safety features and advancements in stability, improved cabin or boom design. Crane manufacturers in close coordination with the project developers can develop the required features. This has been exhibited by Delhi Metro Railway Corporation (DMRC). It worked in close consultation with the crane manufacturers towards developing products that can exhibit more stability while working at undulated sites, making the cranes safe to operate. 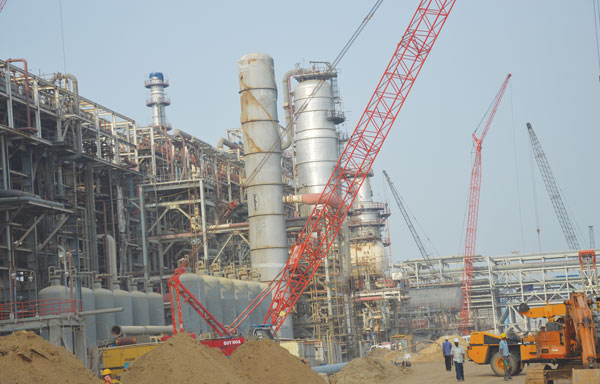 The association led towards development of lighter mobile cranes with rough terrain features by ACE and ECE. Similar coordination can be explored by crane manufacturers, project owners, and contractors involved in the hydrocarbon projects in the North East. One of the vital areas requiring attention is adequate product support in terms of operators training, maintenance, and parts support. The contractors and the project developers in North East have their reservations on the levels of product support by the equipment manufacturers. This needs to be improved, if the crane manufacturers want to encash the upcoming demand in the region.