A Potain tower crane has been brought back to life in Pune, India, even though its owners thought it was beyond repair. The MCi 85 A suffered major structural damage after it endured 150 km/h winds during a cyclonic storm in Gurgaon, which is in north India. But EnCORE, Manitowoc Crane Care's remanufacturing service, repaired the 5 t capacity crane and it is now back in service, building another high-rise tower in Gurgaon.

Gurdeep Singh, Manitowoc Crane Care country head India, said "We had undertaken the repairs of MCi 85 A in the Encore; this crane was bought by Time Autotech from Arabtech Construction. Before deploying the crane at new site Time Autotech decided to get this repaired and refurbished. We are delighted that the extensive repairs were not only successful, but also was far more cost-effective than buying a new crane."

"This was a huge repair and refurbishment job but we completed it in a timely manner and kept costs to a minimum – we are delighted with the result," he says. "When major components are damaged, logistics costs increase because new parts need to be sourced from different factories. But the work was still far more cost-effective than buying a new crane."

The repair took 25 days. A team of eight EnCORE engineers performed structural repairs to the crane's mast and cage, cathead, cabin, hoist winch and control panels, as well as replacing 50m of jib parts, and the counter jib assembly. 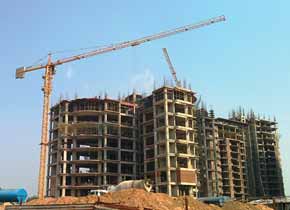 Before the repair work could start, the first challenge was transporting the crane 1,465 km from the customer's job site in Gurgaon to Potain's facility in Pune. The facility is one of a handful of places in the country that can carry out such extensive repair work. It features specialized workshops and equipment dedicated to Potain repairs.

Following the repair, the Potain MCi 85 A has returned to work at a residential project in Gurgaon for main contractor Indiabulls.

Potain's MCi 85 A is the most popular Potain crane in India. It is designed for easy assembly and its strong load chart makes it a very versatile crane.