For numerous applications involved in the expansion of German power lines, KVN Autokrane GmbH has procured a new LTM 1300-6.2 mobile crane from Liebherr. In May, the 300-tonner successfully completed a crane job in this field, in Lower Saxony. KVN is extremely satisfied with their new mobile crane. And the Single-Engine Concept from Liebherr best proves itself through practical application.

In Vechelde in the district of Peine, KVN's LTM 1300-6.2 assembled a new power pole. The heaviest individual part was the lower grid, weighing 27 tonnes. KVN equipped their crane with 56 tonnes of basic counterweight and the 5.5 metre long assembly jib for the task. The LTM 1300-6.2 executed the task with an outreach of 18 meters. For the lift and deposit of the load, the KVN made use of a Liebherr LTF 1060-4.1 telescopic truck-mounted crane as an auxiliary crane. Once the new electricity pylon was installed, the power lines were reassigned from the old tower to the new with the LTM 1300-6.2. Subsequently, the 300-tonner dismantled the old power pole. 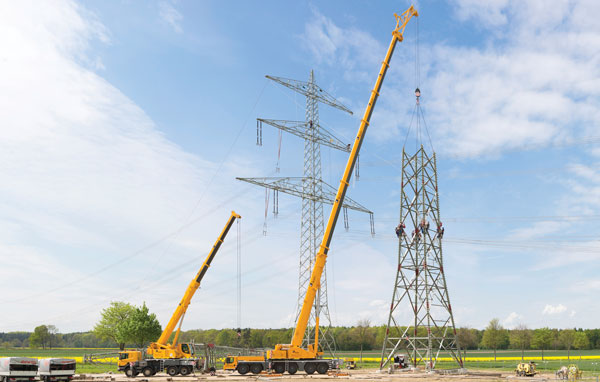 "The LTM 1300-6.2 we have bought in particular for the construction of new power poles and the increase of existing power poles, as our LTM 1200-5.1 reached the limits of its capacity in this application. The existing overhead power lines are no longer sufficient and new transmission lines must be built from north to south. We see good medium-term prospects for mobile crane operations," says Kai Giesker, Commercial Director of KVN Autokrane GmbH, regarding the reasons for acquiring the new crane.

Kai Giesker is impressed by the Liebherr Single-Engine Concept, which was implemented for the first time the LTM 1300-6.2: "We view the new Liebherr single engine design very positively. If Liebherr has new ideas, as a customer for many years, we are confident that they will prevail on the market. We aim to support these new technologies right from the start." Instead of the twin-engine design normally used on cranes in this size class, the 300-tonner is powered by a single engine with a mechanical shaft. The mechanical shaft ensures particularly high efficiency and guarantees the economy of the design in terms of fuel consumption.

KVN Autokrane GmbH, located in Osnabrück, almost exclusively employs cranes from Liebherr. KVN, a company of the Brinkhege Group, and Liebherr, have a decades-long, collaborative relationship. In a fleet of 18 mobile cranes, three are also large LR 1750, LR 1600/2 and LTM 11200-9.1 Liebherr cranes, which are used throughout Europe in the wind power industry.