The nation's capital is home to the world's largest museum and research complex – The Smithsonian Institution. Made up of nearly 20 separate museums and nine research centers, the organization houses some of the country's most prized artifacts, including priceless works of arts and dinosaur bones. It's safe to say that any time the Smithsonian calls for something to be lifted, it requires the utmost in precision planning and flawless lifting. 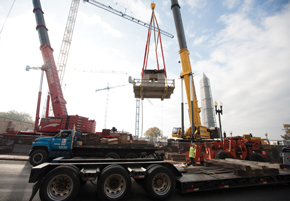 W.O. Grubb was recently contacted for such a project. Tasked with a complex lift for the Smithsonian's new National Museum of African American History and Culture, the company chose two Manitowoc's Grove GMK7550s for a dual lift to ensure the project was completed with the best tools for the job.

The lifts took place immediately adjacent to the National Mall. The first lift was to place a nearly 50 USt railway car that was so large, it had to be put in place before construction of the museum could be completed around it.

The lift took place on Constitution Avenue, next to the National Mall and in view of the Washington Monument. The road was closed and the two Grove cranes moved in to set the shrink-wrapped railway car into a 60 ft deep construction pit. The two cranes were on opposite sides of the 80 ft railway car, which was rigged with two straps on each side with 10 ft spreader beams. The straps were connected to beams underneath the car to avoid damage from hooking to it directly. It was then lowered in place to the sound of applause from onlookers.

The GMK7550 is Grove's largest all-terrain crane. It can lift up to 550 USt and has a 197 ft Megaform boom. The crane features Megatrak suspension on a seven-axle carrier, a removable rear outrigger box, an Allison automatic transmission and a Twin-Lock boom pinning system. When rigged with an 82 ft to 259 ft luffing jib and inserts, the crane can achieve a maximum tip height of 430 ft.

"A key challenge of the project was getting the ground bearing pressures correct for the two Grove all-terrain cranes. They were both set approximately 60 ft from the construction pit to achieve the optimum pressures," he said.

As they lifted the railway car, the two Grove cranes performed like mirror images of each other, a testament to the careful planning and execution of a lift that could not go wrong under any circumstances.

The second lift involved placing a guard tower into the pit that was used in the 1930s at Angola, the Louisiana State Penitentiary, which was known as one of the worst in the country. A 17.5 USt concrete tower and corrugated steel roof made up the tower that was lifted into the pit by a single Grove GMK7550. 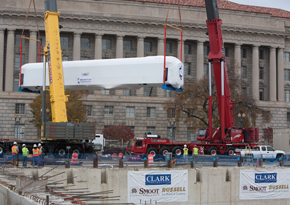 "Months of planning and days of prep work were put in to execute this job," Dieren said. "Everything went beautifully."

W.O. Grubb Crane Rental is based in Richmond, Virginia, and is one of the premier providers of crane rentals, rigging, heavy hauling, major projects and steel erection in the Mid-Atlantic region. The company is family owned and operated, and has multiple locations in Virginia, Maryland and other surrounding states.

In 2013, the company added several new Manitowoc-made cranes to its fleet, including two 300 USt Manitowoc 2250 crawler cranes, a 165 USt Grove GMK 5165 all-terrain crane and a couple of 60 USt Grove TMS760E truck crane, among others.