Manitowoc conducted extensive "Voice of the Customer" exercises to see what users wanted most from a six-axle crane and that research led to the development of the award-winning Grove GMK6400.

As Manitowoc looked to add a new six-axle model to its Grove GMK line its research showed customers were looking for:
To meet these criteria, the company decided on the Grove GMK6400, a completely new crane that would incorporate new technology and a new design. The prototype drew favorable feedback and gave Manitowoc the conviction to proceed with full development.

The first GMK6400s were delivered in July 2012 and the crane is already a hit. It has four standout innovations which differentiate it from others in this class. Each contributes to the crane's superior performance. 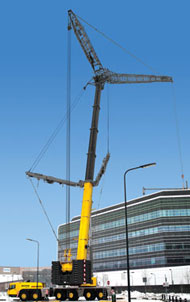 Mobile cranes typically favor a two engine configuration with one for the carrier and one for the superstructure. Some smaller mobile cranes use one engine, but a single engine on a crane the size of the GMK6400 is virtually unheard of.

However Manitowoc was convinced of the concept, as it would save space, weight and cost. Removing the superstructure's engine also had the advantage of removing the exhaust after-treatment system, which is required forthe EUROMOT 3B and EUROMOT 4 regulations.

Introducing a single engine concept on a heavy-duty crane naturally presents several challenges. First, was delivering just the 240 kW of rated power needed by the superstructure from the much larger engine in the carrier. In addition, there would be an educational challenge, convincing customers that running a big engine in "superstructure mode"was more efficient than having two engines.

In the end, Manitowoc was able to slim down the power out put to the superstructure and present a convincing argument to customers of the benefits of the configuration. However by switching to the single engine design, the company reduced the crane's weight by approximately 600 kg compared to a similar crane with two engines.

Using small but powerful hydraulic motors for the wheel drives removes the space constraints caused by the connected shafts and gearboxes found in a standard drive train. Using hydraulic motors also allows more freedom in the carrier frame's design. This meant the drive shafts that would have been needed for the rear axles were eliminated and the front outrigger cross section could be increased to improve capacity (as the hydraulic hoses took up less space under the outrigger box compared with those neededfor a conventional drive shaft).

In addition, the high power of the hydraulic drive allowed the introduction of a very low range maneuvering mode for more sensitive drive feeling – an unusual function for a 400 t crane. Using the mode, the operator can use the full accelerator pedal range, from zero to kick-down, to creep the crane between 0 and 6km/h. No conventional drive crane can offer this kind of control.

The technical challenge of using the hydrostatic drive train was to overcome the known weakness of hydraulic drives at high rpm and speed—lower efficiency and high levels of heat generationwhen traveling long distances by road.

Manitowoc did this by developing the two-drive system which, as mentioned, uses hydrostatic mode to deliver the torque needed at low speeds but which switches off at 20 km/h. When it switches off, the drive hub, together with the wheel, is mechanically de-coupled from the hydraulic motor. Thus the tires on the MegaDrive axles free wheel at high speeds, eliminating hydraulic losses and heat generation.

Self-rigging MegaWingLift
Tensioning systems are relatively common in higher capacity mobile cranes and can increase capacity by up to 70%. But one common concern is the rigging procedure, which requires an auxiliary crane to attach or multiple lifts to rig, leading to longer rigging times.

However, on the Grove GMK6400 the self-rigging MegaWingLift can be installed by the crane itself in just one lift. And the simple design allows the system to be safely rigged in less than 20 minutes. It saves time and money, and eliminates the need for an auxiliary crane.

Fuel Saver Option
When analyzing the single engine concept, Manitowoc also reviewed the GMK6400's fuel consumption. During normal crane operations that require the same output, the company found that a large engine running at low rpm is more fuel efficient than a smaller engine running at high rpm. However this contrasted with the fuel consumption when running idle, which is approximately 60% higher on large engines compared to smaller engines. This presented something of a challenge, as cranes can spend anything up to 80% of their time running idle.

To counter this, Manitowoc created the Fuel Saver Option. This is a new software system (similar to the start/stop automatic mode on modern cars) that reduces rpm when idling, before disconnecting the pumps and then finally shutting the engine off after a given time period has elapsed. To restart the engine, the operator simply nudges any of the joysticks and it returns to running mode.

Optionally this system can be extended with a small diesel engine which starts up when the crane engine stops, to keep the air conditioning and the electrics running. Compared to a conventional superstructure engine in idle mode, the small diesel engine consumes half the amount of fuel.

Conclusion
With these innovations, and others, Manitowoc has created the most powerful six-axle crane in the world. The GMK6400 delivers outstanding lift capability with its self-rigging MegaWingLift system, particularly when combined with the luffing jib. It combines weight-saving technology and unique design concepts to be both more fuel efficient and highly maneuverable. And it not only challenges the capabilities of seven-axle cranes, in many areas it outperforms them.