Immediate or mid-term price correction is not expected in medium and higher tonnage of hydraulic crawler cranes. P.P.Basistha takes stock of the multiprogned strategy of the manufacturers to take on the pricing situation to retain their market shares in terms of volumes and value as competition picks up.

Indian construction sector is all set to witness an interesting saga of the pricing of medium and higher class hydraulic crawler cranes. Prices are well likely to remain at constant levels as was the case during the third quarter of 2009 (this is actually when prices firmed up followed by its southward movement in mid 2008). While this is likely to cheer the end users of multi-utility equipments, however, manufacturers are seriously weighing local demand situation and looking to deliver products through innovative pricing and better customer support to retain their market presence.

The demand for 250 tons and above class in crawler crane category and above 100 ton in tyre mounted category remains quite firm in India led by sound demand fundamentals. Consistency in prices is well expected to remain during 2011. However, variations, leading to northward movements are likely to happen during 2012. Nonetheless, manufacturers observe the predicted trend as 'unclear.'

"Pricing of mid size and heavy hydraulic crawler cranes in India is increasingly getting integrated to global price movements. There is an increased supply of crawler cranes in the Indian construction market from across Europe, Middle East, United States and other parts of the world which had earlier witnessed a surge in construction activities both in industrial, core and commercial sectors," says, Mr. A.K. Somani, Liebherr Cranes. 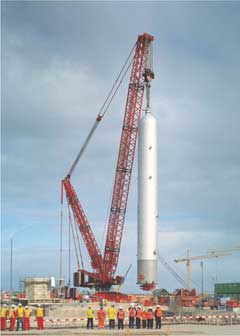 He adds, "to Take on the pricing pressure and retain market position, we are planning to offer better customer service support. Our team of qualified engineers is well- positioned to offer technical assistance to users of our high tech hydraulic cranes at any given point of time." He informs, "Liebherr has a total equipment population of over 60 hydraulic Crawler cranes starting from 350-1350 tons and over 200 Mobile Cranes starting from 30-800 tons working in India across different organizations. The presence of different capacities of cranes, with their proven technology backed by quality service support have given us a good market exposure from different quarters. We would continue to encash preference to Liebherr brand in India, which has earned a big name in quality, timely execution of order and strong after sales support."

Liebherr, which sells its medium and high capacity crawler and mobile cranes in India through the prevailing Euro exchange rates does not plan to cut down on prices as they maintain similar price globally and do not decided it country wise. The company has recently received orders to supply two units of 1350 t hydraulic crawler cranes from Nuclear Power Corporation of India Limited. It has also received order from BHEL to supply couple of units of 600 ton and a large quantity of 350 ton crawler cranes besides a good number of tyre mounted cranes from cement industry.

However, to retain market position in the mid segment, Kobelco has cut down prices of its crawler cranes by 10-15%. According to Mr. Anirrudh Moharir, Deputy General Manager Cranes-Voltas Limited, "Supply side constraints are no more an issue for hydraulic cranes in India. To maintain our market presence, we have resorted to price cuts going by the overall market sentiment where other manufacturers are cutting down prices by 10-15%." 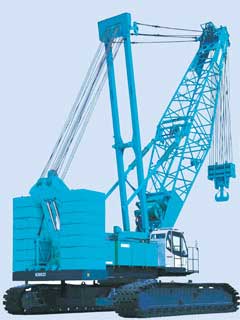 The double whammy for Kobelco to promote its hydraulic crawler cranes in a much price sensitive market in India has also come in the wake of steep appreciation of the Japanese Yen recently at the rate of 25-30%. This has left it with little options but to cut down on pricing. As per Mr. Moharir, "To make good of the low prices and resultantly competition, we are strongly looking to make our services better by taking customers' regular feedback. Further, we are looking at options to provide better services to our customers." Voltas is the distributor of Kobelco hydraulic crawler cranes in India. The company is keen to set up its manufacturing facility in India to manufacture 90t-250t cranes.

Steep appreciation of Japanese yen has also compelled Telcon to cut down on prices of its Japanese Hitachi-Sumitomo hydraulic cranes in India. Telcon has resorted to a price cut at the rate of 30% to make the products attractive to Indian customers. However, to make the product price competitive, Telcon has begun indigenization of the Hitachi-Sumitomo crawler cranes in India.

According to a company spokesman, Telcon plans to launch 80ton hydraulic crawler cranes in India during 2011. The crane would be having 80% localized component while 30% would be imported. This would include electronics and sheet metals. As per the spokesman, post receiving due feedback from the Indian market, Telcon proposes to indigenize 250tons Hitachi-Sumitomo hydraulic crawler cranes. The company made extensive modifications in its best selling duty cycle TFC cranes.

Appreciation of Yen has made the hydraulic crawler cranes expensive putting breakers for their entry in India making manufacturers and distributors to cut prices. Equally high shipment costs from Far East to India have increased prices posing a dual challenge for manufacturers.

Major vessel lines transporting project cargo from Far East to India both through the transshipment and mainline route have increased their tariff levels recently.

Mr. Sheetal Malik, General Manager (Sales–Construction Cranes), Escorts Construction Equipment Limited (ECEL), says "High shipment costs have made the IHI products dearer in India. However, as a distributor we have a limited role to tackle the pricing issue, thus hurting the promotion of the products. 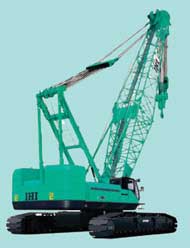 However, as a strategy to counter high pricing and retain our market presence, we are planning to provide better customer support. Besides these, we are also planning to provide long-term loans and extended guarantee to our customers." He further added that still there are few customers who value a quality product over an initial acquisition cost as the life cycle of a crawler crane is quite good. ECEL is the distributor of Japanese manufactured IHI hydraulic crawler cranes in India.

Though low prices are heating up competition impacting volumes, manufacturer like Terex is quite bullish on maintaining its presence amidst the pricing volatility in Indian hydraulic crawler cranes market. Mr. T.R. Badarinarayan, Executive Director, Terex Cranes India, "Terex has so far sold good numbers of 600t & above hydraulic crawler cranes in India.

The engineering that goes in Terex cranes, makes us competitive in providing value for money to our customers, through enhanced equipment uptime as compared to our competitors." He says, "Terex cranes are superior in their safety features coupled with reliable electronics and most importantly hydraulics system build into the product. The superior features of the cranes would allow us to retain our brand value in the long run despite competition hotting up through the entrance of competitors in India." 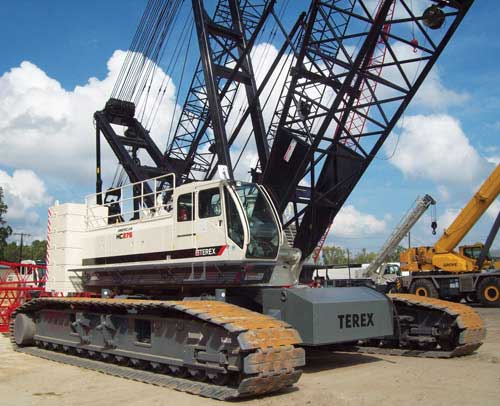 Increased supply of hydraulic crawler cranes in India leading to lowering of prices in the face of demand remaining firm is both a mix of global and local factors. While there has been diversion of cranes from earlier steep global demand markets importantly that of Middle East to India, which has increased their supply and brought down prices. Competition factor from European, Japanese and Chinese players have also brought down prices led by increased availability. But most importantly, there has been returning back of crawler cranes to the market post completion of big projects. The best case in this Delhi Metro Railway Corporation project, Reliance Jammnagar, IOC Panipat refinery or sugar plants in Uttar Pradesh. As per manufacturers' sources, there is a good deal of cranes availability with rental companies and also with project developers itself. Reliance is renting its cranes to the market.

Manufacturers observed that though the demand would remain firm from Greenfield projects happening. Besides these, there would be demand from project maintenance for refineries and power plants. Demand would also be driven from emerging markets like Korea, Vietnam, and Myanmar with China continuing to rule the roost. A good reason for manufacturers for not losing sleep altogether. Nonetheless, coupled with all the factors pricing buoyancy would be distant. However, for Indian contractors and project developers it is time to cheer.