A Report by P. P. Basistha

Crane renting firms have witnessed improved utilization of units in the last six months. Renewed equipment off take is after a prolonged period of slump, as compared to the first quarter of the year, when there has been instances of certain firms reporting complete idling of units. The fresh off take is led by upcoming core and industrial infrastructure projects in hydrocarbon and power sector. Couple of restarted projects is also leading to the demand pull. 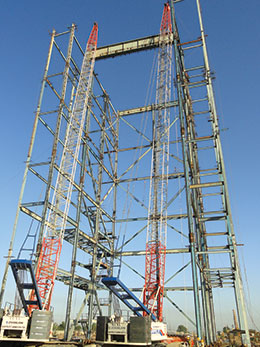 Large scale planned capacity expansion from cement units, ongoing refinery maintenance and debottlenecking activities by oil upstream companies are also behind the improved off take. Indian Oil Corporation has lined up a couple of maintenance and capacity addition programme. Ongoing third phase mega capacity expansion of LNG Pertonet’s Dahej Terminal in Gujarat from present 10 mtpa to 15 mtpa is also resulting towards fresh off take. Crane demand for the project is likely to reach at its peak stage during mid 2015. However, most notable is ongoing second phase expansion of Reliance’s mammoth Jamnagar refinery that has off taken maximum crane fleet from the market. Crane renting firms those have brought new units during 2008-10, it is learnt are entering into long-term contract with Reliance for employing their cranes, so as to minimize their bank liabilities. Firms with freehold units across the country have also entered into long-term agreement with Reliance so as to maintain their overheads. Jamnagar capacity expansion has allowed crane companies to get insulated from the present extremely cyclic demand phase as construction companies continue to refrain from entering into long-term contract with crane renting firms. The preference is rather getting the equipment on need basis. This has been the approach with most of the infrastructure projects contractors.

Contractors involved in Delhi Metro and other metro projects have also resorted to similar practices to hold on margins. They have been focusing on need based approach towards employing cranes for diaphragm wall lowering or concrete pouring from stand alone rental companies. However, the situation has been better for larger capacities mobile and crawler lattice boom cranes, involved in critical jobs of lowering sections of tunnel boring machines. Civil contractors as crane rental companies those have taken up packages with main EPC contractors for diaphragm wall setting, concrete pouring or muck evacuation have also remained insulated from the demand cycles to some extent. Mumbai- based D. Thakkar and Delhi-based, civil contractors, S.B Protech have deployed their new Fuwa, Manitowoc and Kobelco crawler lattice boom cranes on long-term contracts for good number of civil works packages in DMRC projects. 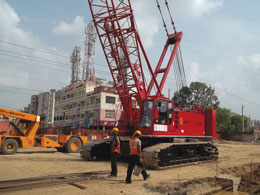 The present spell of renewed off take has been making a positive mark on business sentiments of crane renting firms. Sizeable numbers of firms are looking forward for fresh acquisitions in medium capacities. There are reports of non banking financial institutions getting active to finance acquisition of second hand units among rental companies and contractors. The positive indication makes it prudent for crane hiring companies to look for newer buys. However, when would the planned acquisition initiative, actually translate into a positive decision, will interestingly require to be seen.

There are numerous decisive factors that will play an important role in getting the buying decisions actuated. Planned Greenfield capacity expansions both in core and industrial infrastructure projects, good numbers of which are expected to reach their peak execution by mid of 2015 following from end of 2014 is expected to pull up hiring rates that is also by when bulk of the underutilized/ idle units are expected to be absorbed consequently making the companies opt for purchase. Secondly, it is estimated that close to 60% of small and medium crane rental companies have large scale bank repayment liabilities. The companies will look to deploy units at hiring rates made available by contractors, so as to insulate their equipment from becoming non-performing assets both for short and long-term contracts. This can also delay purchases as under such circumstances as hiring rates are expected to remain depressed, with contractors continuing to have better bargaining powers.

According to industry figures, present hiring rates of new 300 tons class unit is around `15 lakhs as compared to `25 lakhs for a used units of similar class during 2009-10. Further, a bigger paradox is that though there is a big price difference between100-250-300-500 tons class units but there is not much variations in hiring rates, making the renting firms to wait for getting newer units till the rates appreciate. This will be possible with existing units getting fully absorbed.

Going by the present rate of equipment off take, it can be estimated that there could be a time lag of almost two years for complete absorption of existing units, even for the existing companies, those looking for newer acquisitions. 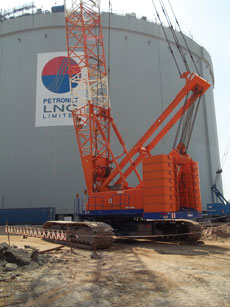 While renting firms are quite positive about the fresh lease of demand, however, they are maintaining restraint till supply gets fully indexed to demand resulting towards rates appreciation. “We are open to acquisition of crawler units between 350-400 tons. However, we will prefer to wait till the hiring rates sees sizeable appreciation coupled with emergence of long term contracts,” says Mr. Satyen Bhoir, Director, Bhoir Tugs and Crane Services. He adds, “We are closely monitoring the upcoming demand from the energy sector. Based on the unfolding demand scenario, we will take an appropriate buying decision.” The Mumbai-based crane renting major possess fleet of crawler units between 50-75-100-200-300-500 tons. It has reported improvement towards unitization of its assets to 90% as compared to 60% six months back. Thirty percent of Bhoir’s cranes are under bank liability cover.

Fresh acquisitions is also been contemplated by Mumbai-based Barkat Cranes Services. According to Mr. Amar Bedi, Director, Barkat, “We are considering options of acquiring 200-300 tons Chinese units and certain bigger capacities of European mobile and crawler units as we find equipment utilization is picking up almost to 80%.” Barkat is looking for demand to come up from expanding cement and energy units, notably from refinery projects. Mr. Bedi mentions, “We will be looking to employ our cranes increasingly in western, central and southern markets. We will refrain from going to eastern part of the country owing to higher transportation cost involved.” Barkat cranes possess 35 units ranging between 70-750 tons comprising mix of mobile and crawler units.

“We are looking forward for acquiring newer units between 100-300 tons by disposing some of our older units in same capacity from our stable,” says Mr. Ashwin Gandhi, Director, Express Global Logistics. The Gujarat-based crane renting firm has reported increment in its crane utilization rate to 60% from 50% earlier.

Western Indian crane renting heavy weight, Samarth Lifters is also mulling towards fresh equipment buys. However, it will be outmost selective in choosing projects, so as to get decent margins. According to Mr. Prakash Shah, Director, Samarth Lifters, “We are looking to enter into hiring contracts directly with the project developer, instead of entering into pacts with contractors. Further, we will look towards the financial profile of the contractors.” The company has entered into long-term contract with Reliance J3 Jamnagar project expansion, where it has deployed 5 numbers of 250 tons-I series Kobelco units. The company acquired new 250 tons crawler unit during bC 2011. Mr. Shah mentioned, “We have been offering units at discounted rates for meeting our bank liabilities.” 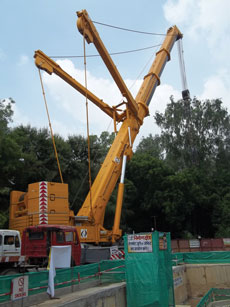 Crane renting companies are looking forward for fresh purchases on indications of improved unit utilization rates. However, it will be interesting to see in near future, how sooner the companies would be able to manage procuring the units from the global crane manufacturers, notably the European companies once they are sanguine to go for the acquisition. This is as because many of the renting firms are mulling to buy higher capacity units of European, Japanese or US- made, rather than the Chinese ones. Obtaining the appreciated rates, will much depend on the timely availability of the equipment backed by adequate product support with the renting firms from the crane manufacturers. This is as because delivery schedules may get extended. This could resultantly make the Indian renting firms to remain contended with compressed hiring rates with the available units. The observation can be examined by the present business results of some major companies, notably Liebherr, Tadano, Kobelco, Manitowoc and Terex (although the two companies saw 14.59 and 7.8 percent decline in crane sales over the first three months of the year compared to the same period last year), all reporting improved sales from different other markets during June 2014 and looking forward for improved sales during latter part of 2014. However, in which way the assessment takes shape will depend on the future demand cycles of the global market, which is showing indications of revival.