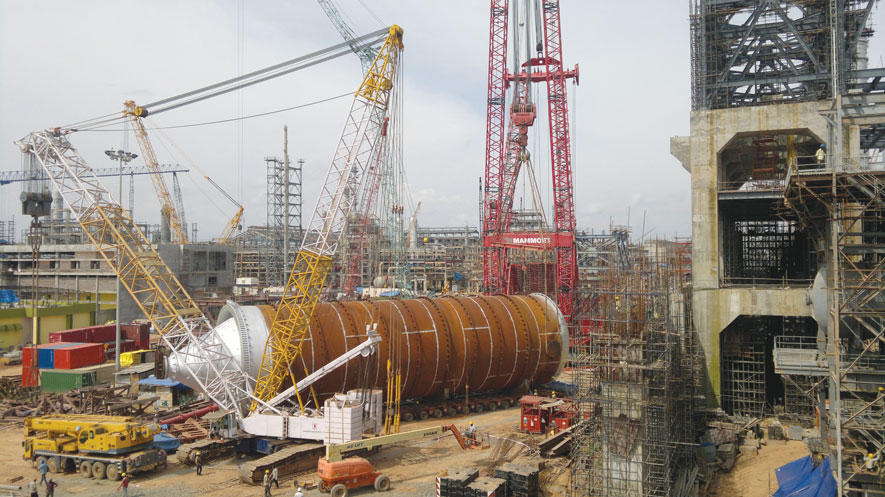 With erection jobs in industrial construction sector becoming increasingly complex, a handful of heavy lift crane rental agencies in the country are adapting specialization to perform the tasks through their assets. P.P. Basistha takes a look at the gradual evolving, and highly interesting scenario.

General renting out of assets to perform erection jobs may not be a long-term assured business proposition for Indian crane rental agencies in the years to come. This is due to project sizes in industrial construction as well as general infrastructure sector attaining bigger proportions. This is coupled with projects becoming more complex than ever before. Further, leaving minimal room for complacency, owners and developers of these complex projects with erection and installing requirements, must have cranes that deliver the highest level of accuracy. Moreover, with jobs becoming increasingly time bound to arrest cost escalations, safety is a major consideration like never before. Interested crane renting parties looking to participate in these premium projects, need to fulfill all these requirements.

These sheer sized projects with very high levels of design complexity are getting featured in the Indian crude oil refinery sector. The high levels of complexity are being incorporated in greenfield crude oil refinery projects as well as in brownfield expansions. The design complexity through setting up of multiple trains is to make the refineries yield multiple finished products, and consequently deliver optimum returns on the colossal capital project investments that the project developers have committed on these giant refinery projects.

With the project developers and the project management consultants having optimum knowledge on the execution of such projects, the required lifting plan set by them is highly critical. This is well exhibited in the upcoming, Bharat Petroleum's Kochi refinery expansion project being developed at a cost of INR 14, 051.6 crores. The project, named as Integrated Refinery Expansion Project (IREP), will increase Kochi refinery's capacity from the existing 9.5 to 15.5 million metric tonnes per annum. 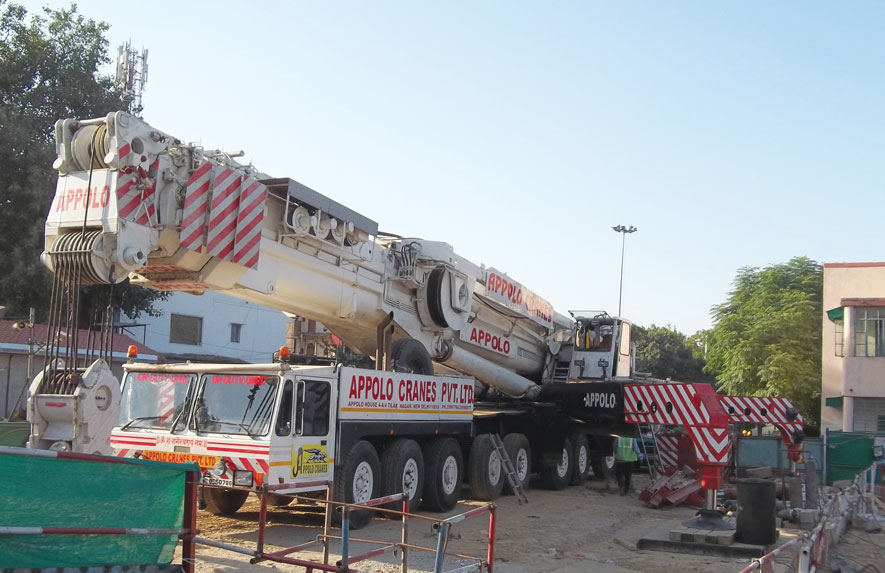 The project coming up adjacent to the existing refinery and getting ample space is a major constraint. Further, a tight deadline for completion (by the end of this year), and safe operation of cranes is of topmost priority by BPCL. Given the highly challenging requirements, contractors have to prove that the cranes deployed at the site both from the rental agencies as well as those belonging to them are able to perform optimally during critical and all other lifts at given angles, with safe load indicators, winches and all other components working correctly. The crane is then certified by the third party agency and vetted by Engineers India Limited (EIL), the project management consultant for the project. The lift plan given by the contractor is also examined and vetted by taking into consideration various external factors like wind and other climatic conditions by EIL. It is following these levels of serious examinations that the crane is deemed to be fit for working on the project.

The challenge is more for this project and other big refinery projects because most of the critical erection jobs, which are heavier, come with tandem lifting requirements. This makes it pivotal for crane rental agencies involved in these projects to ensure that the erection jobs will have to be executed with the highest levels of precision and safety, and the load chart will have to be prepared accordingly.

The lifting requirements make it prerequisite for crane rental agencies involved in these projects to deploy assets that come at a high premium. They must ofcourse, have a sound knowledge base for carrying out the erection with these premium equipment. 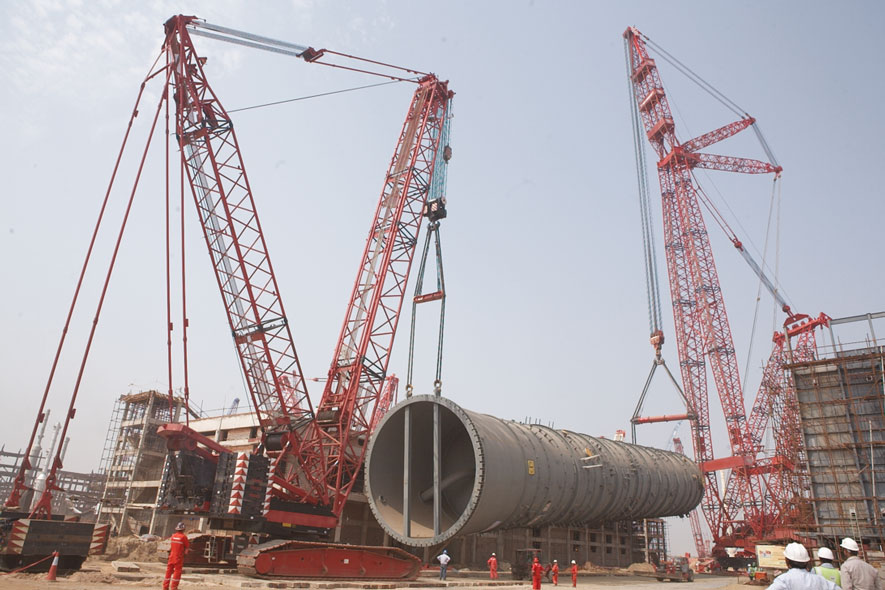 All Cargo Logistics, one of the major crane rental agencies involved in the Integrated Expansion project for erection of two VGO reactors, (each weighing 650 tons) partnered with a Singapore-based crane rental agency for executing the job. A Demag CC 6800, 1200 tons crawler crane and a 550 tons tailing crawler crane from All Cargo were employed for the job. Boom of the main crane was kept at 66 meters and 36 meters for the tailing crane to erect 48 meters long VGO unit. 400 tons super lift counter weight and 250 tons car body counterweight was used in the main crane.180 tons crane counterweight and 110 tons super lift counterweight in the tailing crane was used for the package.

All Cargo has earlier partnered with Dutch heavy lift specialist Mammoet for erection of distillation columns in the mega greenfield Paradip refinery project of Indian Oil Corporation. Under the partnership, they deployed four heavy capacity crawler cranes of 2000, 1600, 1200, and 600 tons for erection of the vaccum distillation units. The cranes were configured for undertaking tandem lifting for the distillation unit column. Apart from the main boom, luffing jib configurations were made into the booms for erecting the VDU. Paradip refinery's VDU column is the largest in the world, weighing 1208mt, 57 meters in height with a diameter of 14 meters. 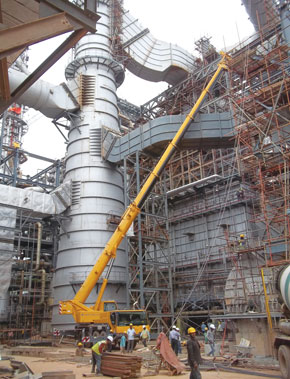 Going further, in energy projects, onshore based LNG terminals require erection of domes from the ground levels for placement on the storage tanks with the highest level of precision. The erection becomes more challenging if the project site is highly windy, like the Kochi LNG terminal being developed by Petronet LNG. Meeting the stringent and highly accurate erection requirements of the Japanese contractor IHI involved in construction of the tanks, Sangvi had deployed its 250 tons Kobelco and Hitachi Sumitomo crawler cranes for the job.

Complex erection and lowering requirements are also being increasingly exhibited in urban infrastructure jobs. For instance, metro railway construction using underground construction methodology with Tunnel Boring Machines (TBM) for cutting hard rock strata and even for cross over rock sections. TBM's are also being increasingly used for undertaking jobs with high concentration of population where displacement is a major issue. This is evident in all the metropolitan cities.

Well maintained high capacity cranes with appropriate load chart and boom configurations supported with superlifts are being increasingly required for lowering and erecting sections of TBM's from the shafts with high levels of safety. The safety requirements are higher if the cranes are working at highly populated areas as evident in metro jobs. 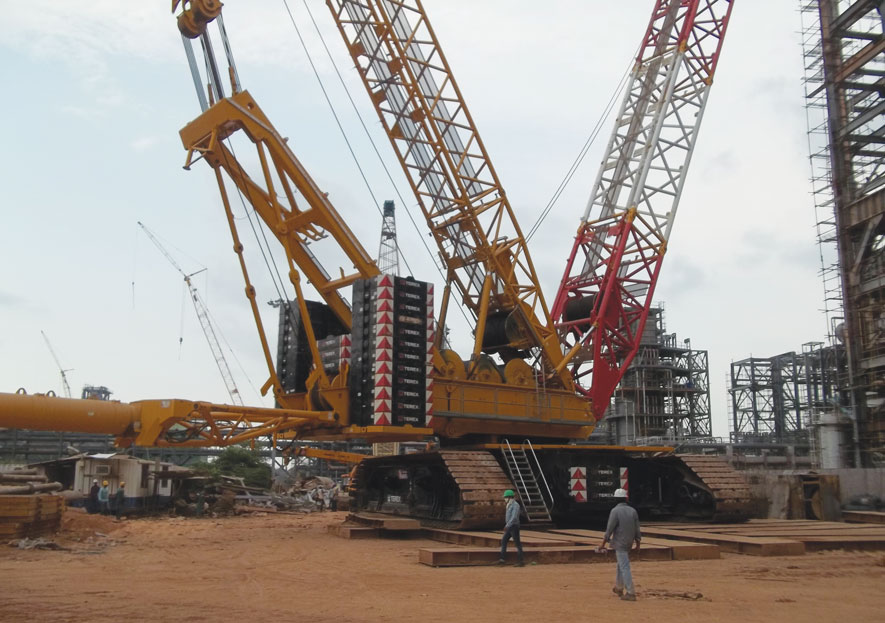 Delhi-based crane rental heavyweight Apollo Cranes has recently deployed its Demag AC 1600, all terrain crane at DMRC's construction site at Sarojini Nagar. The 650 tons crane undertook the critical task of lifting sections of tunnel boring machines from the exit shaft of Sarojini Nagar following boring of the corridor between Sarojini Nagar and Bhikaji Cama Place. The sections lifted by the cranes weighing between 75-85-107-121 tons at 18, 16 and 14 meters working radius comprised cutter head sections, shield bar, back up gantry erection sections and other supporting equipment of TBM's. The total number of heavy lifts were 15–16.

Precise load calculations were made by Apollo to ensure that with given high lifting capacity, and ability of the crane to work at longer radius, the unit is able to lift exactly the required loads without any loss. 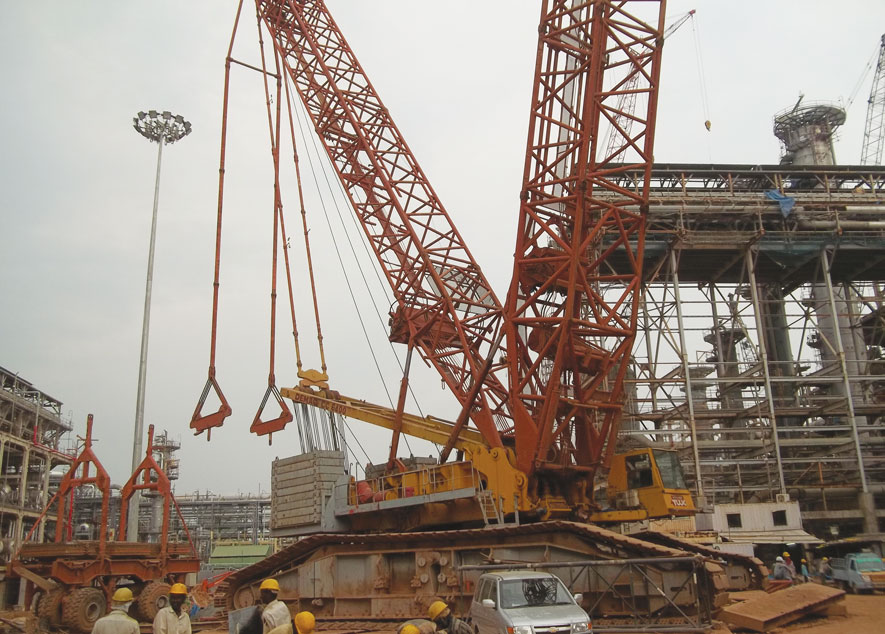 The newly emerging, complex, heavy lift requirements of these niche projects in the country featuring high levels of refined engineering have numerous requirements for crane rental agencies. First of all, to be a part of these projects they will have to deploy premium assets along with the highest levels of knowledge for efficiently operating these cranes to deliver optimum results, (departing from the past practice of simply renting out the assets). Secondly, higher levels of knowledge will also be required to maintain the cranes, and for commissioning, dismantling and transportation without causing damage to the equipment. All of this will require higher levels of capital investments. The resultant dividends are higher rental margins.

The need to attain asset based specialization is vital for Indian crane rental agencies, notably those active in the heavy lift segment. With projects becoming specialized and complex, competition will not be restricted from counterparts at home as earlier, but from global players which is gradually becoming evident. Rental companies that are adapting to this fact are well likely to be insulated from the fluctuations of the rental rates.