Comansa Tower Cranes for a Landmark Building in Dublin

Ireland's National Conference Centre has been designed by Kevin Roche, awarded with the Pritzker Prize, the Nobel of Architecture. The Irish Government expects this Centre to be a new international landmark, and will invest €380 million for its construction and maintenance over 25 years. 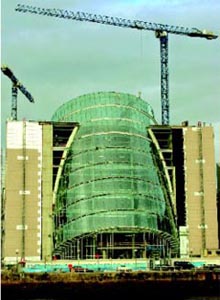 Stafford Tower Cranes, exclusive dealer for Linden Comansa in Ireland, is supplying three Flat - Top cranes from the Spanish manufacturer for the construction of Ireland's National Conference Centre. These three cranes, model 21 LC 290 have been working on this site since 2007 and shall continue to do so until completion of the project in late spring of this year, although the venue is expected to open in 2010. The 21 LC 290 crane has a maximum load of 18 tons, and can load up to 2,700 kilos at the end of the jib. It has a maximum freestanding height of 64.9 meters, and a maximum jib length of 74 meters. But as noticed on the photographs, the cranes have been built up to above 80 meters to meet project requirements.

The National Conference Centre has been designed by Kevin Roche, one of Ireland's most renowed architects, who was awarded with the Pritzker Prize, the most prestigious in Architecture. One of his most popular creations is the Museum of Modern Art (MoMA) in New York. 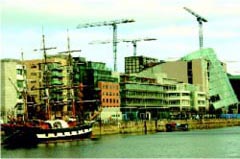 Spencer Dock Convention Centre Dublin Ltd. has been chosen by the Government of Ireland for the design, build and finance of the venue, and to operate it during 25 years, after which the facility will revert to the State. During this period, Ireland will pay the company an annual charge, for a total investment of €380 million. The State expects this venue to be a new landmark site for Ireland, and a key point for its tourist and economic development during the next years.

This landmark building is being built in the very centre of Spencer Docks, close to the ship "Jeanie Johnston," one of Dublin's most popular touristic spots. It's a replica of a wooden sailing ship built in Quebec in 1847, which carried hundreds of Irish emigrants to the United States and Canada during the "Irish Potato famine" in the mid 19th century.

During the last twelve months, Stafford tower cranes has expanded its activities beyond Ireland and is now active in a joint venture partnership as official Linden Comansa dealer in Dubai (United Arab Emirates) and has plans for further expansion in the future.