Two tower cranes from Linden Comansa's Chinese subsidiary, on the construction of the Kalisindh Thermal Energy "super" plant in India.

BGR Energy Systems Ltd. specialized, in energy plant engineering and construction, is in charge of one of India's most important energy projects. With an initial budget of almost 725 million Euros (around 820 million US Dollars), the Kalisindh Thermal Energy Plant is part of an ambitious plan from the Rajasthan Government, who expects to produce up to 1,200 Mw (2 x 600) when the plant is operative. 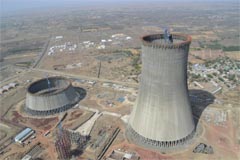 For the construction of the two cooling towers, BGR Energy Systems is using two 21CJ290 tower cranes from Comansa Jie, with maximum load capacity of 18 tonnes. Both have jib length of 74 meters, the maximum of this model, which allows them to reach the tower's base diameter, of 142 meters. To build the towers up to 202 meters, which it is believed that makes them the world's highest cooling towers (ahead of Niederaussem in Germany), both cranes have been jacked-up with a hydraulic cage in different phases, until they reached 217 meters of height. Furthermore, the 21CJ290 required rope anchorages to the shell wall of towers, assuring an optimal performance and the total stability of the cranes. 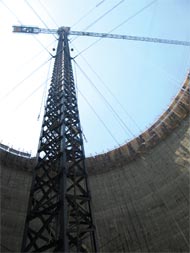 The construction of the first cooling tower ended this June. To dismantle the crane at such height, and without any access for a mobile crane, a new dismantling device, designed by Linden Comansa, was used. This device allows to disas- semble the jib sections and to hoist them down inside the cooling tower. Dismantling the first jib sections, the jib length of the 21CJ290 was decreased to 35m, shorter than the minimum diameter of the tower, which allowed enough space for 21CJ290 to jack down the tower crane with the hydraulic cage.

The 21LC290, with Flat-Top design, is one of the most successful models from Comansa Jie, the Chinese Joint Venture of Spain based manufacturer Linden Comansa. The Indian construction companies are showing great interest in this model, which has proved that it an excellent solution to build cooling towers. Currently, there are seven 21CJ290s working on energy plants across the country. And the two units at Kalisindh, BGR Energy System has another couple of 21CJ290 18t at the Marwa plant (2 x 500 Mw), while Indian engineering giant Larsen & Toubro is using two units at Rajpura plant (2 x 700 Mw) and another in the construction of the Talwandi Sabo plant (3 x 600 Mw.)