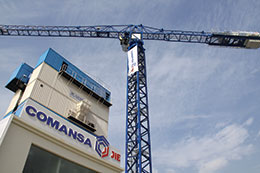 Full details of the new Comansa Jie tower crane will be given during the show, where visitors will be able to see the crane erected on a 4.5 meter folding-cross base. A slewing part, with the hoisting and slewing winches, will also be exhibited on ground level for a better show of details, allowing demonstrations with the remote control.

During the show, Comansa Jie will also voice the enlargement of its factory in Hangzhou, 190 kilometers away from Shanghai, and the expansion of its plant coverage to 38,000m2. These new premises will allow Comansa Jie to increase its production and to offer a wider range of tower cranes with higher capacities.

Comansa Jie’s expectations from the new tower crane and the trade show are high. "The new model will improve our range and will allow us to have a better share in large markets like China or India. During the last Bauma China in 2012, we received orders worth 8 million US dollars approximately, which was fantastic. We hope that the new crane will help us to achieve a similar success in the 2014 show", says Andy Huang, Comansa Jie’s General Manager.

Asia is a very important market not only for Comansa Jie but also for Linden Comansa. Therefore, a sales team from Linden Comansa in Spain will fly to Shanghai to accompany Comansa Jie at Bauma China and to welcome friends and customers from all over the world.